Received a call from my credit card fraud department asking if I just made an EBay purchase in India, as their computer had flagged and halted a transaction.

Answered no! They did not process the transaction.

Long story short, account cancelled and a new card is being issued.

I was told they will overnight a new card.

If you haven't done so already, a good idea to ensure the card company has your cell phone number so you can be contacted immediately to approve or disallow a transaction. Also, a good idea to contact them if your going to be traveling outside your normal region of travel, so the companies computer does not flag your transactions.
Posted by Lost Target at Thursday, May 26, 2011 2 comments:

My MEC 9000G reloader had a broken weld in the upper part of the machine.

Contacted MEC and found that the weld was covered under warrenty, even if you owned the machine for ten years or more. A side note. If not covered, they charge $65 an hour, plus parts.

I have not idea how old my reloader is, but I think I purchased it about a year after they became available, upgrading from a Grabber.

I had two options, send the machine to them for repair or they would send me the part, free of charge.

I had no desire to tear down a reloader and then re-assemble, so I shipped it via the post office for $23, to include $500 insurance.

Recieved an email on 23 May saying they received the reloader, being fixed under warrenty and would be out of the shop on 24 May.

On May 26, UPS delivered the repaired reloader...
Posted by Lost Target at Thursday, May 26, 2011 No comments:

Ann Cockburn, Ontario, has been nice enough to pass on photos from the 2011 U.S. Open being held at M&M Hunting Preserve & Sporting Clays, Pennsville, New Jersey. I included a link on the photo page so you can check scores.

I didn't shoot, just dropped by in the afternoon with the camera.

Shoots at the Roue normally see in excess of 100 shooters, but not this day.

On some stations background lighting was great, but on others, a dark cloudy background. Also, you could be at a station with the rain hitting your back and at the next the rain would be in your face.

Surprisingly, I did not see many "no bird" calls. All machines have target covers and did well keeping targets dry.

A good bunch at the club and all seemed to be in good humor, before and after hitting the course.

Four parcours were set, with up to four squads on the course at any one time. To limit long waits before you shoot, the club set start times for squads. 9am, 11am & 1pm. Works well and gives volunteers a chance to take a break.

Several stations were skeet in the woods, but LM could easily have been choke of choice at a few stations.

Rain was in the forecast, but it held off for the most part until just before the 1pm flights, but it was more of a nuisance rain then rain that would spoil the shoot.

Not the greatest scores shot by most, rather low overall, but it seemed all had a good time.

Seated primers were not flush with the brass on my MEC 9000G 12 gauge re-loader when coming off station 2. I went to adjust the reprime tube and found the following. A broken weld... 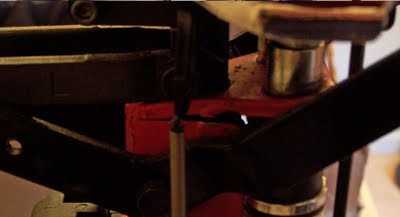 Sent the photo to MEC and received the following response.

"Welds are replaced under warranty so you can either send the press in or we can send you the part at no charge."

As I would have to remove all the parts and reassemble, I'm sending in the press.
Posted by Lost Target at Tuesday, May 10, 2011 No comments:

Thanks Club Valleyfield & the QPTA

One of the smaller clubs in Quebec, but a club with a big heart!

I received an email a few months back with the Valleyfield schedule for posting to Clays Quebec. A "Lost Target Fun Shoot" was listed. Not even asking if I was interested before putting out the schedule.

Anyhow; a nice day for a shoot and thanks to everyone who attended and to Club Valleyfield for supporting the Lost Target via shoot proceeds and a check from the club. Also, thanks to the Quebec Trap Shooting Association who also presented me with a check. 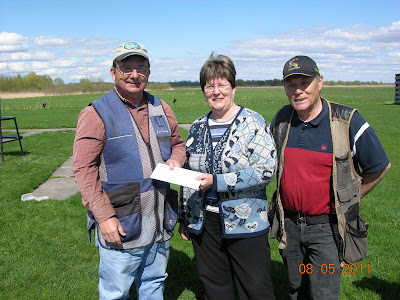 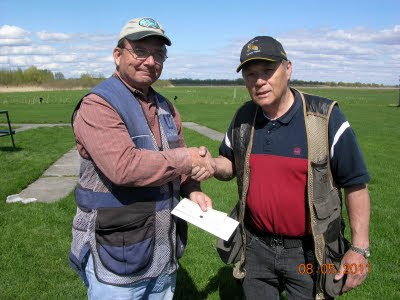 Joe Potosky (L) accepting a check from Marcel lebond (Representing the Quebec Trap Shooting Association) for support of the QPTA and clay target shooting in Quebec.

Wish to attract American target shooters back to Canadian clubs? Numbers that were last seen in the 70s and 80s.

The Canadian rules for registering non-restricted firearms will likely
change in 2011 or next year at the latest.

An excellent opportunity for the government to revise the firearm
rules for visitors to Canada.

“Visitors to Canada with firearms are required to complete a Non-Resident Firearm Declaration, Form CAFC 909.

Once this declaration has been confirmed by a customs officer, it is valid for a period of up to sixty (60) days.

If you are returning to Canada with the same firearms as those listed on this declaration form, you may use the form again.


The use of this form was changed and made more restricted some time back. The monetary fee drove American target shooters away in vast numbers.

Initially, there was no charge for use of this form (may be mistaken), and then it was $50 for a period longer than 60 days, and then reduced to $25 and the present 60 day time limit.

I presume the 60 days is to allow enough flexibility for hunters, but
it seems the needs of target shooters was not considered and in turn
resulted with clubs seeing huge loses in regard to Americans present
at shoots and events at various clubs throughout Canada.

May I suggest the Non-Resident Firearm Declaration, Form CAFC 909 be valid for 12 months and free of charge.

As a side note. The form Canadians use to enter the U.S. (ATF Form 6NIA) is valid for 12 months and issued at no charge!

All clubs and shooting organizations, to include trap, skeet, sporting
clays and rifle organizations within Canada are encouraged to write
members of parliament, the Conservative party and Prime Minister
Stephen Harper's office to make known the need for a revision to Form CAFC 909 in regard to non-restricted firearms and visitors to Canada.

Revise the Non-Resident Firearm Declaration, Form CAFC 909 to be valid for 12 months and free of charge.

Joe Potosky
The Lost Target
Posted by Lost Target at Sunday, May 08, 2011 3 comments:

The form is used by U.S. Customs to document firearms (and other high valued items) being temporally taken out of the country.

Besides firearms, you may list cameras, lap tops, watches and so on.

The form allows you to re-enter the U.S. with firearm(s) that were in your possession when you departed the U.S.

The form has been available on-line since 2008. The down-loadable form is in PDF format. All information required can be inserted via your computer keyboard.

Type in the information, print it out, and present to U.S. Customs prior to leaving the USA. A one time requirement, unless the items listed are modified or the form is no longer readable.

I used the PDF version in 2010 as older forms in my possession had become worn. I brought all firearms listed to the border, as serial numbers are required to be verified before a CPA official will sign the form.

Do not bring firearms into the building. They will come out to your vehicle. The whole process can be completed in under ten minutes, depending on traffic and availability of agents.

I laminated the signed form to prevent wear and tear!

A U.S. citizen last week downloaded the form, filled it out (listing firearms) and presented it to U.S. customs.

The New York border crossing agent would not accept the PDF version of the form, as he said it was not original. He made the person re-list the information (hand printed) on a blank CBP Form 4457 before he would sign off on the form.

Defeats the purpose of the government making the form available for download. May additional training be needed?

I mention this, as not a big deal by itself, but after crossing the border for many years with firearms and rather well versed in requirements, I've had the occasion where at one time or another I experienced Canadian or U.S. officials making up the rules in regard to paperwork requirements and causing me some delay. Once I sat in a Canadian customs office and once in a U.S. customs office as supervisors needed to be contacted. On both occasions after contact with supervisors, I was sent on my way. No apology received...

Due to circumstances beyond our control with the construction of a shot containment curtain at the Montpelier Gun Club in Berlin, VT, the Vermont Trapshooting Association and Montpelier Gun Club have had to make some changes in our registered shoot schedule this summer.

The delays in construction of the shot curtain are the result of excessive and restrictive federal and state requirements in the design, planning, permitting, and funding steps in constructing the curtain.

Although we have been working on this project for about two years, we will not have our shot curtain completed until July.

This is forcing us to CANCEL our Memorial Weekend Shoot, previously scheduled for May 28th and 29th, as well as RESCHEDULE the Vermont State Shoot from June 17th, 18th, and 19th to July 29th, 30th, and 31st.


* Memorial Weekend Shoot, scheduled for May 28th and 29th (CANCELLED)


Unfortunately, I’m sure a lot of shooters have made their summer traveling plans and we are going to disappoint some of them.

I regret this but we have had no choice other than to make these changes.

Dennis DeVaux
Posted by Lost Target at Wednesday, May 04, 2011 No comments:

A two field club. Have not visited for several years, but the times I have in the past, shoots started on time and always well run. That was the case on this visit!

I think I paid $36 for two hundred targets, to include fees. That had to be the cheapest I shot 200 registered targets for in the past six months, in any clay target discipline...

The club was having off and on problems with one speaker, but by the time I shot handicap, not a problem.

A few youth shooters in attendance.

I didn't get the ladies name that runs the kitchen, but as always a nice job!

I had problems with reloads at my last shoot. A number of lite loads. A new can of 700X was dropping lite and I had not checked my loads. Going up one bushing solved all powder issues. Not one bad shell!