The game plan after visiting the 2007 Shot Show was for the next day to visit Tenoroc Shooting Sports in Lakeland, Florida and shoot sporting clays. A first visit to Orlando and we wanted to tie it in with a visit to one of the local clubs. 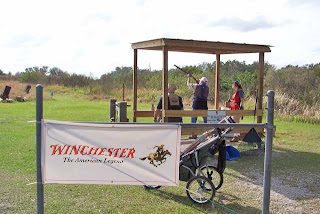 A forty minute drive from Orlando.

On I-4 near Disney World, both coming and going, the police were out in force and a number of vehicles were pulled over. The most police activity I've seen in Florida. Traffic flow was never an issue and we never experienced any slow downs.

The Tenoroc club was easy to find and everyone is welcomed! The club is southwest of Orlando.

A posted sign said targets were $0.40 each. When we paid at the end of the day we received a reduced rate as we were visiting from outside the area. I'm not sure if it was a member rate or what, or that's the norm for visitors from outside the region, as I did not ask. In any case, it was appreciated.

Target payment is on the honor system. You tell them how many boxes you shot and pay accordingly.

The ten station course was not crowded, but a steady flow of shooters were coming and going during are visit. A father and son was going out as we were walking back to the main building. A lone shooter should not have any problem squadding up.

Everyone was friendly and more than happy to spend a few minutes talking. As we had just attended the Shot Show all were interested in hearing about it. We ran into two shooters who had attended the same day we did and we talked about the $100,000 guns we saw.

One gentlemen was out shooting the course with his .410 using 7 1/2 shot and having a great time. I saw him at a few stations and he missed more than a few, but you could tell he was having fun.

I saw a number of carts next to the main building and assume they have rentals, but if you don't mind carrying you ammunition, a cart is not required.

The course is not laid out in a circle or horse shoe configuration. You walk in and walk out on the same path.

The course lacked rabbit, springing teal, and tower shots but I was told a number of machines were on loan to support a charity shoot at another club and I can only assume they are offered when all machines are available. I did see a place where a tower machine could be placed.

The club has ammunition for sale and I saw Estates and Winchester. They also sell a full line of reloading components.

Next to the main building is a 100 yard rife range and next to that is a pistol range. Both ranges had a large number of shooters. Both ranges are supervised.

I did see an archery range but did not check it out.

Driving home we purchased gas for $2.26.