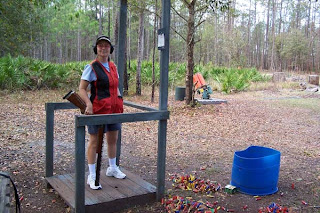 The game plan was to shoot sporting clays in the early afternoon at WW, and later on in the day run over to Jacksonville Skeet and shoot skeet and trap.

We never made it to Jacksonville Skeet, as we had such a good time shooting and talking, the next we knew it was time to head for home.

A good bunch at the club and everyone is friendly. We ran into a nice couple on the sporting course and shot skeet with a young person who was with his dad.

The sporting course consisted of 12 stations to include tower, rabbit and chandels.

I overheard a few shooters talking about using modified choke, but as most practice courses, IC was all that was needed.

Shooters coming and going throughout the day, but never a crowded feeling.

The club is just west of Jacksonville, off of I-10. Open at noon on Wednesday & Friday and 8:30 on Saturday and Sunday.

They sell hot dogs and chips on weekends, or if you prefer, you can stop for fast food about five minutes from the club. Gas at the local station was $2.16.