Friday saw a number of severe storm systems go through and I wondered if the shoot at Okefenokee Sporting Clays in Folkston, Georgia would be held, as the storm systems passed right over the club. The club is located on the edge of the Okefenokee swamp and I feared they might experience flooding, as well as wind damage from the storms.

I called owner Roni Murray and he assured me that the shoot was being held as scheduled. I would just have a few puddles to jump over, and oh by the way, it's going to be windy. 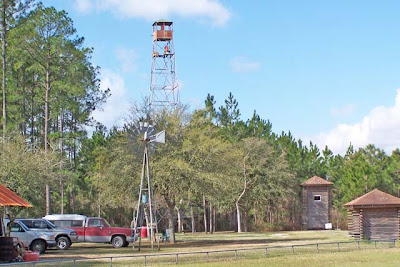 By the time we arrived at the club the clouds had mostly cleared. The main building was working off a generator but power was shortly restored.

It was on the cool side and it never hit 60 degrees. The wind did not help.

Learning are lesson from previous shoots we came prepared for the cool temperatures and half a closet of winter-ware was packed in the vehicle.

The club holds four NSCA shoots in one weekend. AM and PM shoots on Saturday and Sunday. We attended on Saturday.

The club has free lunch on both days, but on Saturday they throw in a steak dinner.

Chicken and fish for lunch and the steaks covered 2/3's of a dinner plate. All the trimmings you would expect with both meals.

The club is famous for the food it makes available to shooters and also to almost anyone who drops in for a visit when the club is not holding a shoot.

The PM targets were tougher than the AM targets. I got beat up pretty badly in the PM. The wind was messing with targets, but I still should have shot a bit better. Anyway, a frustrating afternoon but we did have fun and everyone was having a good time and thats the bottom line.

If I lived close enough I would love to return and shoot the PM course two or three times.

Shoot off's were shot over the combination skeet/5-stand field.

A very friendly bunch at the shoot, not only those that worked the shoot but also the shooters.

As seen at WW Sporting and Bradford Farm in Florida, the owner of Okefenokee, Roni Murray, also sets the tone for his club and it's all positive.

Eric from Jacksonville was nice enough to let us share his motorized cart, both in the AM and PM. Thanks...