Friday the squad shot a 100 target prelim and Saturday at 8:30am, a two parcour FITASC.

The 20 gauge course had one station I would have set differently, as it was a true pair that left many snap shooting the second target. I don't care for those types of presentations, but figure they separate the boys at the top of the pack.

Saying that, we did a prelim re-shoot Saturday afternoon for $35 and the station did not seem that bad the second time around.

A squad mate on the FITASC squad, Brice Duponsel from Montreal, shot a 25x25 on parcour #1. He ended the day as champion with a 45x50. 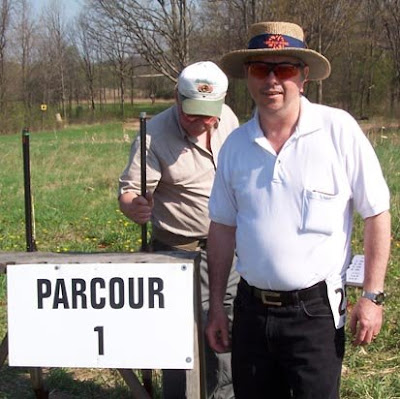 I received a warning for mounting my gun prior to calling for a target in FITASC. That's a no, no.

Both parcours were excellent and all targets were both fair and hittable. We took a range finder to parcour #1 when we finished and a tree that seemed to attract targets came in at 50 yards.

A strong wind came through the grounds at 3:10pm on Saturday. So strong it had me looking for a tornado. By 3:20pm we had a pouring rain. It let up for a bit but resumed. It went from 85 degrees to 67 degrees.

Sunday is the main event and were looking for sun but on the cool side.