I mentioned in a previous post I do preventive maintenance on Remington 1100's we own, replacing the Action Spring and Magazine Spring before they need replacing.

Replacing the Action Spring on my 1100 turned out to be a problem, as I did not have the proper tool.

After removing the butt plate, I saw the Action Spring Tube Nut had been replaced by GraCoil when they installed a adjustable comb and butt plate. The Remington tube nut removal tool would not work, as they used a different fastener.

A 7/8" deep socket was needed. I didn't have the proper size socket that was thin enough to fit into the opening at the end of the stock. 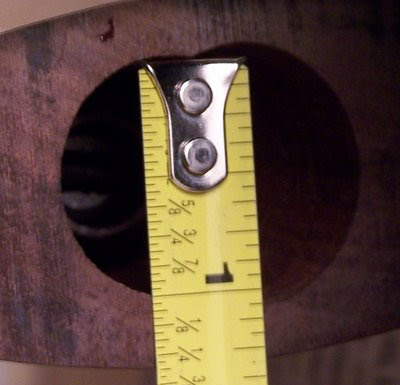 I visited Lowes and Sears, but no luck.

I asked Jean Brousseau, the manager at Club L'Acadie if he could take a look. He took me to his work shop and tried several sockets. After trying various sockets from his main tool chest, he dug into a drawer and found a Snap-on deep socket that worked. He said Snap-on sockets run a little thinner. Thanks Jean...

With the Action Spring and Magazine Spring replaced, I dropped the trigger for cleaning.

The Feed Latch fell out!

Not something that normally can be fixed without the proper tool.

I had re-staked a Feed Latch in an emergency once, using a punch, but this one required the tool Remington designed for installing this part.

In a pinch you can put it back in without having it re-staked, but not recommended.

A call to the local Gander Mt. gunsmith found they could do the work at the store, but it would be a week before they could work on it. Not my favorite store in regard to ammunition and reloading supplies, as they over charge, but...

As for the Feed Latch.

When you want to remove the Action Bar Assembly, you must press on the Feed Latch located inside the receiver.

Feel around and press on the Feed Latch. At the same time pull out the Assembly. You may have to roll the Assembly from side to side to get it to pop.

Once you have the assembly removed, be careful as the sharp edges on the inside of the receiver can cut fingers.

If the T Link falls out with the Assmebly removed, best to use finger nose plyers to insert. Years ago I saw broken links from time to time, but not in the past ten years. I assume Remington is using a harder metal.
Posted by Lost Target at Tuesday, October 28, 2008