We stopped by Beikirch's during are trip to Rochester, New York. Beikirch's is a regional distributor of shooting related items, to include reloading supplies.

No 700X, Universal Clays, or Clays. All the powders that were on my shopping list.

W209 primers were not in stock.

A shipment of lead was scheduled for next week. I was told the shipment would normally last 3-4 weeks, but recently sold within seven days.

The were selling Estate shells for $54.90 per case.

We started shooting on Friday and stopped on Sunday.

The main event targets were some of the best ever. Something for everyone. 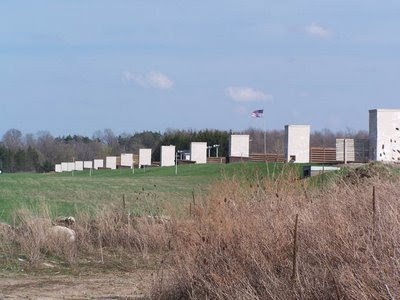 Looking at the fields I see they have the same problem they had from the last time they hosted the shoot.

The soil on a number of fields is 4-5" inches higher than the pads.

During and after a heavy rain your standing in water when shooting, as the water does not drain off the pads/fields.

Two days after it ceased raining at the last Open, water was still well above my ankles when on the pads. Not what I expected for a U.S. Open!

We went to the local Walmart and purchased rubber boots prior to going out. A shooter from Vermont borrowed my boots when I got off the field!

I would think some type of tractor with a blade could remove the excess soil.

The PAT Trap they have now was purchased used (rebuilt) and is suppose to be either the first or second PAT Trap ever sold by the company.

The club is holding a registered trap shoot this Sunday.

I had a video rejected by YouTube as I did not own the music I used with the video.

The weather forecast was not looking good. Dropping temperatures throughout the day with a chance of showers.

Prior to breakfast it was 61 degrees and overcast. Departing the restaurant it was 55...

The 8:30 squads saw the cold temperatures and overcast skies, but around 11AM the skies started to clear. Around noon there was a two minute shower and that was it. The temperature sored into the 70's. Wind was not a factor. So much for the weather report...

We shoot the second rotaion at 11:30 so we walked the course and I took photos of the 8:30 squads.

A well thought out course that seemed to flow.

A handful of stations required LM or better choke with the majority just needing IC. A few stations only needed skeet choke. Targets for all classes of shooters!

Except for one eye test in a low lying area, excellent visibiity of targets. The one station was a problem even in the sun.

The mobile tower was a bit of fun... 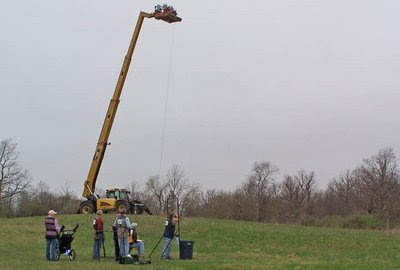 A four shot station. I hit two after missing the first two targets. A six foot lead with plenty of gun speed.

I missed some easy targets and broke targets that I thought I had no chance of hitting. At the end of the day I did not feel beaten up and wished I could stick around for a re-shoot.

By the way, I think a record number of shooters in attendance...

16 stations with refs posted at each station.

The wind was in play and definitely moved the targets. Hats were seen flying about...

The wind was a curse, but also a godsend, as the wind help kept the temperature bearable.

A number of shooters were seen with sunburn!

Free bottled water was plentifully on the course. I may have drank eight or nine bottles throughout the day.

If there was any machine problems I did not experience them.

The two FITASC parcours we shot in the PM were fantastic.

A new location from previous years.

I probable shot the worst scores ever, but I enjoyed the presentations and layout.

The high temperature for Sunday is suppose to be 60 degrees...

A five hour drive to the Rochester Brooks Gun Club (New York), not counting the stops along the route.

Registration was a breeze. I just checked the information I provided when I pre-registered and handed them a check.

I hit some type of lucky draw held for those who pre-registered and won a box of BP shells.

A nice 100 target prelim, cost $50. On Friday you get a ref that follows your squad around the course. On Saturday and Sunday refs are assigned stations.

Part of the prelim course was sitted in a newly cleared wooded area.

The wind picked up throughout the afternoon and I'm sure we saw different target presentations than seen by previous squads.

If I remember correctly I shot a 76.

83 degrees when we returned to the vehicle. The high was suppose to be 73.

Saturday were doing a prelim re-shoot and FITASC in the afternoon,

Myself and another shooter visited Club L'Acadie. The club is located southeast of Montreal, maybe 35 minutes from the U.S. border.

We wanted to get in 5-Stand practice prior to heading out to a shoot next weekend and the club has a 13 machine setup. 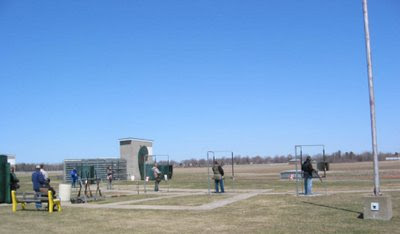 The club was busy. Two skeet fields and three trap fields, filled for most part of the day.

A squad was also out shooting International Skeet and a number of shooters were messing around shooting FITASC. The club has three Olympic trap bunkers but I did not notice if any were in use.

First time visitors need be warned that this is not an inexpensive club and prices are high, even by Florida standards.

The clup offers a ten ticket package with a case of shells and that is the way to go.

Americans receive a free membership, but are required to pay the annual $15 (Canadian) insurance fee.

We drove over to the Sportsman's Club of Franklin County today. This is the first week of the clubs summer schedule. It includes Thursday shooting. 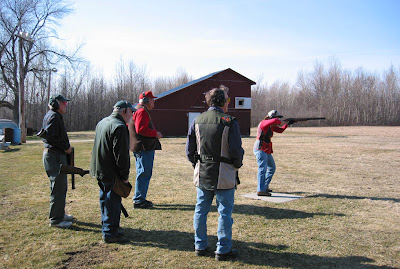 We shot trap and skeet.

The club uses PAT traps for both trap and skeet. The skeet model is an excellent machine.

The trap machine is used in conjunction with a voice release. The skeet fields have wireless release, but I prefer hooking up the cord.

I've been using my 1100 exclusively for the last few weeks, as my O/U has to be sent in for re-bluing but I've been procrastinating on getting it in the mail. Anyway, having big problems hitting a station 8 bird as the 1100 does not swing like the O/U. No problems on other stations. The next time out I need to burn off a box of shells on station 8.

I use the same 1100 for trap. I add three spacers to the adjustable comb and use a 30" trap barrel.

It felt like the stock was a little on the short side. It seemed that way when I attended the Montreal Skeet Club Good Friday Trap shoot. I constantly found myself changing my head positon. I increased the length a bit today and gave it a try. I expect to give it a nice workout on Sunday, shooting 5-Stand at Club L'Acaide.

The SCFC club is having a skeet/trap fun shoot on May 17. I don't know the format, but I will presume at least 50 skeet and/or 50 trap. Shooting normally starts at 9AM and you can show up any time in the AM to register.

I've passed on the fun shoots held at the club the past few years, but this one we will be attending.

Vermont gasoline taxes are lower than New York and we paid $1.98 per gallon. The local station nearest my home is selling gas for $2.23 per gallon.

A skeet shooter had the following firearms stolen from his home.

I would think a Perazzi with a LEFT HANDED Precision Fit stock suddenly showing up at the local club would invite a quick inspection of the serial number...

A cool start to the day and not warming until the afternoon.

The club was running a promotion in conjunction with the shoot and you could purchase Challenger shells for $60 per case.

A nice patterning, soft shooting shell. This is a premier shell manufactured in Quebec and in my opinion just as good as the Winchester brand.

The club has one of the better kitchens and I had a full breakfast prior to shooting.

A great background and very good targets. I don't remember one NO TARGET call.

A note to Canadians. Just prior to entering Canada I was stopped by U.S. customs who were conducting secondary inspections. I was so close to the border I could see the Canadian customs station.

As a reminder. A Passport or Enhanced Drivers License will be required to enter the U.S. at all land crossing as of 1 June 2009. This includes Americans. If flying, only a passport will be accepted.

The previous week I shot sporting clays in 80 degree weather...

A quick drive to the north and this week I don't think we saw 40...

A damp overcast day with maybe a snow flak or two in the AM. Windy at times!

A 12 station shoot. Warm weather and a drying of land will see the club opening up the back property and offering 16 station shoots.

Choice of AM or PM start times.

The target setter did a nice job.

I missed the targets coming off the tower shown in the video. Thankfully, the first shot on that station was a non-tower target that most had a good chance of hitting.

124 shooters attended with a 92 being high score.

A few problems with target release buttons. Some had problems with a button and others no problem with the same button. Frustrated more than a few...

Crossing the border was not a problem. I cross many times throughout the course of the year. An American visiting Canada for the first time, following the guidance I have posted on the Lost Target for bringing a firearm into Canada was at the shoot. He did not report any problems crossing the border.

As of 1 June 2009 you will require either a Passport or an Enhanced Drivers License to enter the states when using a land crossing. This includes Americans and Canadians. If you enter the U.S. by air, only a passport will be accepted!

A very favorable currency exchange rate for Americans at this time. If thinking of visiting Canada in 2009, this may be the time to purchase Canadian currency.
Posted by Lost Target at Monday, April 06, 2009 No comments: