A cool (cold) rainy morning. As the norm the club went with three rotations. We shot at 11:30. It stopped raining when we had five stations left. The last rotation did not see the rain.

Not a heavy rain and at times a drizzle. Combined with a slight wind that kicked in it did not make for a great time on the course. I had debated wearing an extra layer of clothing, but chose not to and suffered for it. You would think after all these years I would know better.

As always, the volunteer refs did an excellent job!

A few machines I think suffered from damp targets but that was rectified in short order.

A let down for me was the club shot the main event over the same property used for the prelim. Yes, machines had been moved, but it was always something we look forward to, the shooting over a virgin course on Sunday.

What I think would be worth a try but I failed to mention it to shoot management is to have a number of rental carts already in place at the sporting clays parking area, instead of picking up the cart at the main building and then driving the cart to the course a untold number of times over a three day period. It may already be an option but I'm not aware...

In the middle of the event on Sunday I broke the Link in my Remington 1100. I think the only part on the 1100 that I had not replaced in the past year or so. 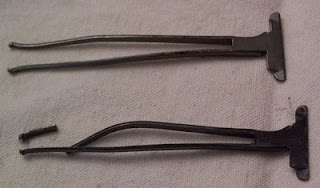 The gun had started to act up early on and I had no idea why. The first broken link I've seen in ten years.

I already had the maximum malfunctions allowed when the firearm stopped working.

I was cold and wet and in no mood to have to drop a trigger and replace the link. In any case I did not want to hold up the squad.

A fellow shooter was kind enough to lend me a spare 390. It fit like a glove, but obviously it did not swing like my 1100. After being on a hot streak for the last five or six stations it was all downhill. Just the breaks of the game...

Any firearm dealers or manufacturers that would like to donate a shotgun, feel free to contact me : )