A two hour drive to attend the sporting clays shoot held at the Bull's Eye Club in Orange Center, Vermont.

At least five stands were duel stations.  As an example; Station #1 was also Station #2.  Just using a different trap for the second station.  A nice way to keep down labor requirements.

The trappers hustled throughout the day.

Because of past legal action the club is hampered in regard to shot fall zones and thus target presentations.

At many stands, posts in front of you restrict your gun swing. See photo. 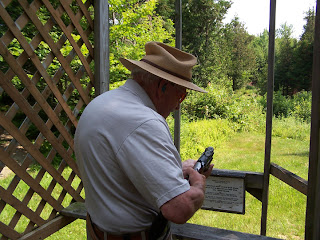 Not usually a problem, as presentations for the most part are in front of you.

However; on two stations, from time to time, targets went wider then they were suppose to. I hit a post with my barrel a few times.  Not hard, more of a tap.

Wider presentations then the target setter expects can be a problem with hand traps, not always a consistent presentation, as depends on how targets are set on the arm. I think I'm allowed not to shoot when my barrel taps the post, but kind of hard to not take the shot when swinging hard.

For one station I couldn't get comfortable with my stance and swing. It was an awkward shot for where I planned on breaking the targets, taking into consideration gun swing restrictions and where I could start my gun.  I guess you need to belly up to the front of the stand to give the most swing.

If not an NSCA shoot I wouldn't mention the restrictions, but first time visiting NSCA shooters need to know what to expect.  Clubs have to do what they have to do, but when throwing registered targets all needs to be on the table.

I went with IC choke.  Maybe twice throwing in the skeet choke.  For one station, some shooters may have been more comfortable with LM.

A duel rabbit presentation was a nice change of pace.

Plenty of water on the course.

The club offered an excellent lunch!

Everyone seemed to have a good time. It was on the warm side.

93 was the temperature when departing the club.