This shoot is being held at Club L'Acadie (Quebec).

U.S. shooters will need a passport (driving or flying) or an enhanced drivers license (driving only) to re-enter the U.S.A.

Firearms need to be listed on Customs Form 4457 prior to departing the states.

A temporary firearm license from Canada is required. Cost is $25 per shooter, good for 60 days.  The form is processed on day of crossing.

Details can be found at this link.

I have posted information in regard to the club in general, to include google map and driving instuctions.

Video from Saturday's shooting (200 singles) at the Montpelier Gun Club.

I didn't have the greatest start on the first 50, but in the afternoon I managed a 95.  Twice missing the last target : (

I was shooting Remington Gun Clubs.  The brass pulled off one shell.  I see brass separation on and off with these shells (factory).

The sun was shinning on Saturday, but I'm told the rains moved in during Sunday's events.

The shot curtain is not an issue when shooting.  If anything it gives you a consistent background when targets go in that direction.

Many clubs now offer on-line registration and something I highly recommend.  A few years back we showed up without pre-registration and had to wait several hours to shoot the first 100, as we wished to shoot together and they did not have any early squads with two openings.

Shooting trap practice on Thursday and one of the rails on the action bar snapped.

Two friends also had action bar rails snap in the not so recent past, so not surprised.  I had actually been thinking that I better be ready for mine to break and just ordered a Forend Support for my spare, as one of the wings was missing.

Thinking I might save a few dollars I separated the two main pieces that make up the assembly with the hope of just ordering the part I needed. 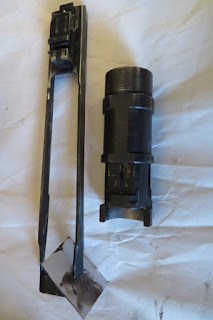 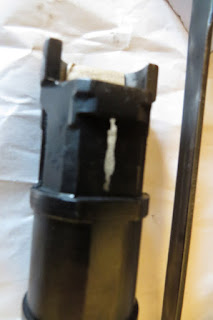 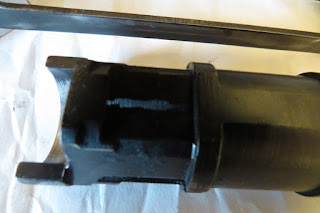 A nice hole in the Action Bar Sleeve that's not suppose to be!

I have no idea how this came about or for how long it's been this way, but I would guess the result of metal fatigue over a period of time.  Did this weakening of the metal stress the bar and cause the breakage?  Have no idea, but something to add to my list to check when going over the firearm after a tear down!
Posted by Lost Target at Sunday, June 16, 2013 No comments:

10 Hurt, Including Teen, When Shotgun Goes Off At Gun Club

ELBURN, Ill. (STMW) – Two men and a 14-year-old boy were hospitalized and several other people injured when a shotgun accidentally fired and the round struck the floor, bounced up and struck them at a west suburban gun club Tuesday night.

Emergency personnel were called to the St. Charles Sportsmen’s Club at 44W471 Keslinger Rd. in unincorporated Blackberry Township near Elburn about 7:30 p.m., according to the Kane County Sheriff’s office.

A 69-year-old St. Charles man who belongs to the members-only club had just completed target shooting and entered the clubhouse. He was to putting his 12-gauge shotgun away and thought he had inserted a snap cap, a plug used to save the firing pin while a gun is stored, according to a statement from the sheriff’s office.

But instead of the snap cap, he put a live shotgun shell into the gun, police said. With the man pointed at the floor, he pulled the trigger, and the gun discharged, sending buckshot to the floor, where it bounced up and out and struck several people in the clubhouse, police said.

The person who had the accidental discharge will most likely be bankrupt, as he faces ten (10) potentially lawsuits, accident or not.

The question is, what's the clubs liability, if any?

Do they allow guns in the clubhouse, and if not, is this rule enforced or ignored?

Do they allow the use of snap caps on club property?

What is the clubs policy on the use of snap caps?

Where on club property is a shooter allowed to pull the trigger on a firearm?  Is there a designated safe area other then on a shooting station?

Not going to debate if snap caps are needed in modern firearms, the debate the club will be having is with its insurance company and the lawyers who will be bringing suit.  Will the insurance company defend and pay any claims or put it all on the club?

As for your clubs rules. Part of discovery will be if the club has rules that prohibit certain practices. The plaintiffs lawyers will investigate if the rules have a history of being enforced.  If not, it's like the rule didn't exist!

Not the first time I've heard of an accidental discharge in regard to a firearm with a SNAP CAP going off.  Maybe it's time to ban them from all clubs, as when it's all said and done, the club must be protected from any potential lawsuits, no matter the feelings of a small group of shooters.

For those who wish to use a snap cap, insert them when you get home!

On the evening of May 31, 2013, the OTA Shooting Park in El Reno, Oklahoma was destroyed by a tornado.  We are VERY THANKFUL that there were no injuries or death!  These pictures illustrate some of the terrible damage.  After assessing all of the damage, we will begin the process of re-building.  The OTA management will keep all of our members informed of our plans and progress.   We would like to thank all of you for your help and concern.  More to come in a few days.......