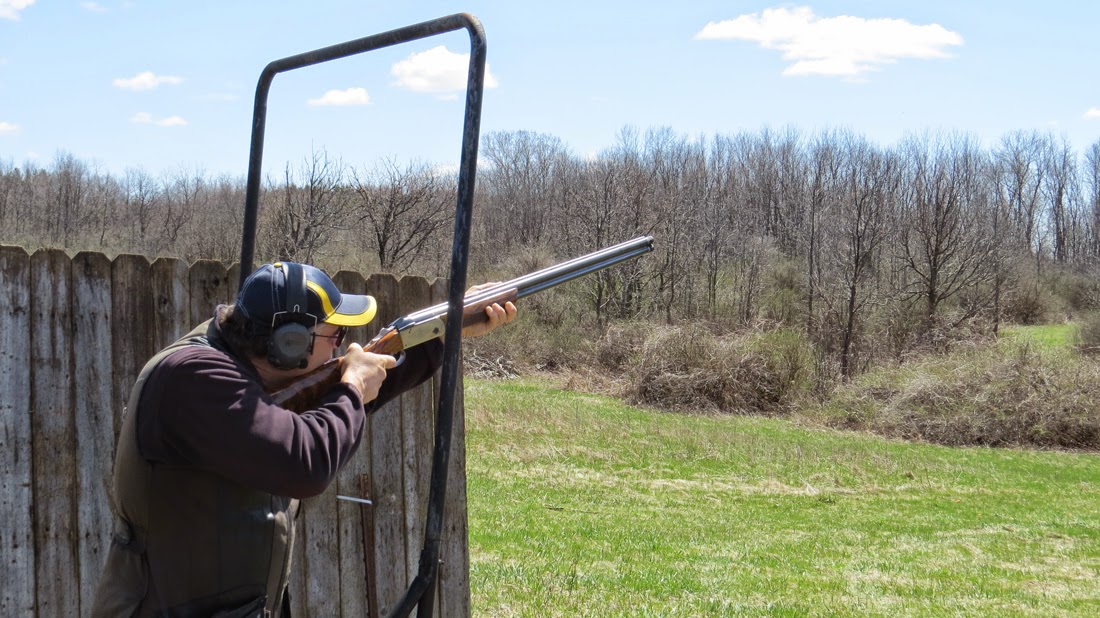 Saturday
A cold day on Friday. A 5 1/2 hour drive from the house. On the ride to the club driving through the Adirondack Mountains snow flurries and snow on the ground west of Speculator.


Flurries and windy at the club. Skies were dark at times. A tough day for shooting, but squads were out getting their licks in.  If the trash cans on the courses were metal instead of plastic I’m sure more than a few warming fires would have been lit.
My friend shot the FITASC and said not an overly difficult course, but the wind and snow flurries made for interesting targets. I’m guessing shooters on Saturday for the most part had higher scores due to the more pleasant weather. From what I saw Saturday morning at the parcours I assume I guessed correctly.


A more pleasant day on Saturday with sunny skies and temperatures in the low 50’s. We shot a small gauge event in the AM and the prelim in the PM. I was comfortable throughout the day.
Sunday was the 17 station main event, a Spring Deuce tradition.  Unfortunately, overcast and colder then what we saw on Saturday, but nothing like Friday.  The sun did try to break out a few times.  A bit of a wind, but not too bad for the 11:30 rotation.  I started out wearing my shooting jacket but took it off after a few stations.

Targets from what I seen were fair and I didn't experience any eye test stations!

You needed more then IC choke on several stations, but with 17 stations in the main event, their was targets for everyone.


A long video, the longest I ever posted. Included is a large number of slow motion target hits.  Could easily have been two videos (or left out a lot), but what I had in my head before the shoot and went with it.
Referees were knowledgeable and machine problems (very few) were quickly fixed. Plenty of water on the course.
The desk posted scores promptly.  Viewable on two of the clubs flat screen TV's.
Motels only 15 minutes from the club and major shopping ten minutes north of the motels.
Posted by Lost Target at Monday, April 27, 2015 1 comment:

US rules for departing the US with a rifle rescinded

WASHINGTON – U.S. Senator John Hoeven, chairman of the Department of Homeland Security Appropriations Committee, today announced that the U.S. Customs and Border Protection (CBP) will no longer require U.S hunters traveling internationally to obtain an IRS identification number in order to bring personal weapons on hunting trips outside the U.S.

At a meeting early Wednesday with U.S. CBP Commissioner R. Gil Kerlikowske, Hoeven secured a commitment from the agency to return to the paper process used by international hunters for years, while updates are made to the automated reporting system for exporting weapons. Kurlekowske said the agency’s web site would be updated later today.

“Hunters should not have to register as a business with the IRS in order to bring their weapons and ammunition on international hunting trips,” said Hoeven. “This is an unnecessary and burdensome requirement on law-abiding citizens. We appreciate that CBP has recognized this and will return to their original forms for international hunters, while they update their automated system to recognize the difference between a commercial exporter and a sportsman traveling on a hunting trip to Canada or another country.”

CBP recently began enforcing regulatory changes from 2012 requiring U.S. hunters to comply with commercial export requirements when transporting firearms outside the U.S. for personal use. Under these requirements, in order for a U.S. hunter to take personal weapons to another country temporarily, the individual would have to register the weapon in the Automated Export System (AES) and provide a transaction number to CBP.

The AES is designed for commercial exporters and requires all users to obtain an Employer Identification Number (EIN) from the IRS in order to access the system. CBP has acknowledged that forcing hunters to obtain an EIN is not appropriate. Under the agreement reached this week, the agency will allow international hunters to use the original paper process while CBP works with the Department of State on an appropriate long-term solution.
Posted by Lost Target at Thursday, April 23, 2015 No comments:

The 1100 would fire without problem, but if I touched the Link (T) the wrong way while cleaning with the bolt to the rear it would come off it's track.

An older 1100 and pretty much shot out and something I had not run across before.  My thinking was I had a worn receiver.

When switching the stock to another receiver I decided to do a complete breakdown.  During the breakdown I found the Action Spring Plug jammed in the tube.  It was frozen in place and would not move, down or up.
Ended up backing it out using a screwdriver, with the theory I could back it out like you would a screw.  My next step if that failed was to work a breakdown cleaning rod into the tube via the chamber and pound it out.

The Action Spring Plug looked beat up and greater minds then mind would have to tell me how it got that way!

Put the gun together and the Link is not falling off it's track.

For now the gun is designated as a backup gun, but I will take it out to the range and give it a workout and see if the problem with the Link is resolved.
Posted by Lost Target at Friday, April 17, 2015 No comments: