Graco had installed an adjustable comb on Heide's 1100 and we wanted to give it a workout.

She had already shot skeet and trap with it, but wanting to make sure their was no problem with the settings for sporting as a lot of gun movement that you don't see in skeet or trap.

No face slap, no bruised cheek, and no shooting off the top of targets.  Good to go!

I had a couple of targets on the back course I shot a battery of artillery at but not even a scratch. Unfortunately on the course by are lonesome and no one I could receive guidance from.  Where's all the AA shooters when you need one?

The 5-Stand is still under construction, but the end is in sight.  A heated building for those who wish to shoot throughout the winter in comfort. 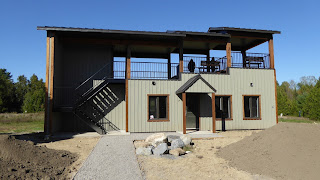 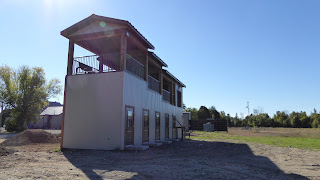 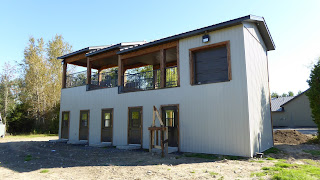 Who would not like station #8 on the back course? 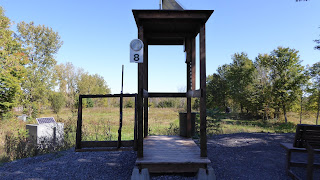 Crossing the border entering Canada the vehicle was thoroughly gone through.  Most complete inspection of a vehicle and contents that I've experienced in ten years.  Hey, just doing their job! When the inspection was completed I asked the person who inspected if he'd like to join us at the club to shoot some clay targets as only a 15 minute drive.

On returning to the states the border agent was someone who knew me from my military days....
Posted by Lost Target at Sunday, September 27, 2015 No comments:

I passed on a one day skeet shoot.  Almost a first for me, but I hadn’t done any real practice and If I was going to shoot I was going to have to shoot my tube set that I hadn’t shot since April.  At one time a burning passion, but….
---


I went with the weather forecast and missed a fun shoot.  Turned out to be a sunny afternoon : (
I was all set to depart (a two hour drive) but kept looking at the weather and it didn’t look like it was going to be a fun day. Rain, rain, and more rain.  It was the consensus on various weather outlets. So much for weather reports!
---

Eye glass prescription changed for distance (both eyes).  An on-line order with Decot and a week later I had my new lenses.  I got two sets.  The second set is a hair darker then what I’ve been using, but I’ve been finding on bright sunny days I need a darker lens as I start to squint with the lens I normally use.

Dark lenses is not recommend for everyday use.  Go with the lightest color you can get away with.
---


Visited the Underhill club on Tuesday for an afternoon of 5-stand.  Started out with IC but quickly changed to LM.  If I could only remember what target came out of what machine….
---


Still learning to shoot my A400 Beretta (30 inch barrel).  Been shooting 1100’s forever and a big difference in swing that I’m still getting use to.  I've noticed the barrel gets hotter quicker then does the 1100 barrel.
---
I shot skeet with the Beretta today with IC choke and happy with the results.  Not a formal round, as we shot random stations and didn’t shoot station 8.  After I saw that I was hitting the targets well I shot on purpose under a few crossing targets (lower and lower) until I missed.  Just seeing what I could get away with.  As expected, no forgiveness for shooting over the target.


We hit the trap range and I went with LM choke, as that is the choke I tend to use in sporting.  Again I can see the difference in swing from the 1100 I use to shoot.  Some of the angle targets I failed to put enough lead on.  Found myself shooting at them instead of slightly ahead.  Also, shot over a few, but got better by the third round.  But, you don’t have that much time to self-evaluate when in a tournament and it’s going to take time to shoot the gun well without thinking.
---


I had Graco install an adjustable comb on a 1100 stock for my wife Heide.  It already had an adjustable butt plate with the stock cut down.
Quick turn around on the install.  They had it four days total. The first day it was picked up at the post office and the fourth day was a call asking for payment and how I wanted it shipped?

We visited the SCFC in Vermont and she shot random skeet stations with a 28 inch light contour barrel (IC choke) with three comb washers installed.  It looked right on the money.  I watched closely to see where she was hitting the targets and no top hits that I could see.


A trip to the trap range with the 30 inch trap barrel and five washers was the ticket.
---


I’m thinking of given my Beretta a workout at a sporting shoot this weekend.
---
Next week we’re going to visit the Roue Du Roy in Quebec and will see how well my wife's 1100 handles on the sporting course.  The last time we visited they were well into their build of the new enclosed 5-stand and maybe it will have been completed.

Posted by Lost Target at Thursday, September 24, 2015 No comments: