My wife and I we're testing a Remington 1100 we wanted to designate as a backup gun.  It has an adjustable comb and butt plate and it can be used by either of us.

Shooting skeet it twice failed to completely load the second shell.  Shooting Estates and at first assumed dirty shells, but the way the second shell stopped just short of loading completely into the barrel had me thinking it wasn't the shells.

Thought about it for a few days and tore down the 1100, to include taking off the stock to give it a going over.  As is my rule, if the stock is off, replace the Action Spring ($5 - $6 part).  I've long had that habit and just earlier this year I was talking to a person who repairs firearms and he recommends yearly replacement, as he thinks the cause of many broken 1100 parts.

This was also the 1100 where I previously found an out of whack Action Spring Plug.  It would not slide easily in or out of the tube. I had to back it out with a screwdriver.  I figure time to replace but only new style plugs available.  I found an old style plug on ebay. The ebay replacement slid in and out without any effort. No, have no idea why the old plug failed.

Did a thorough cleaning to include the trigger.  When putting the gun back together I noticed the tip of the Link (T) missing.  The two ends seat the Link into the Action Spring Follower.  With one tip missing you end up with a loose (and out of align) Link.  I've had them break before but never seen a missing tip. 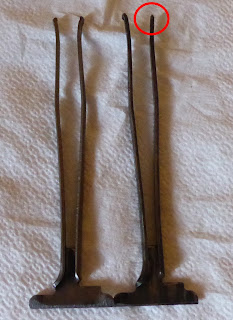 I suspect I found the reason the two shells didn't load correctly.

I also replaced the Barrel Seal.
Posted by Lost Target at Saturday, November 14, 2015