I had my doubts on turnout at the fun turkey shoot at Club L'Acadie, with 30 degree temperatures and snow flurries in the forecast, but pleasantly surprised with 32 shooting skeet and lesser numbers shooting the trap (27) and 5 Stand (18) events.  Friday my wife and I shot practice in Vermont and it was 60 degrees. 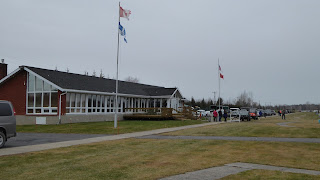 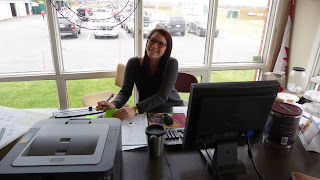 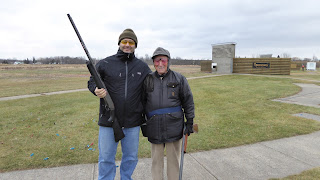 I'm thinking the best turnout for this annual event seen in recent years.

I shot the 50 target trap event.  I don't speak French, but do understand the numbers 1-5 called out in French when moving from station to station.  Saying that, not uncommon for a trapper to call out the numbers in both French and English when I'm on a squad.  Today it was all French : )

The club is located just southeast of Montreal. I cross the New York/Quebec border to attend.  No border traffic to speak of this time of year (I use one of the smaller crossings) and no problems transporting my shotgun.

Upon re-entering the U.S. the agent did make a casual inquiry about my U.S. Customs Form 4457 lamination (form used to list firearms and other high value goods that you departed the states with).

He quickly came to the conclusion that I shoot in Canada often and thus the reason for the lamination.

Many years ago I started laminating the forms to protect them from wear and tear. The form does not expire and is good for as long as the information is readable and the information hasn't changed.

Nothing in federal regulations prohibit lamination and I've only been challenged once in that regard.