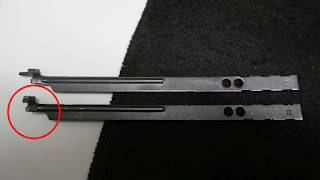 We're shooting Indian River and the wife's says her bolt won't lock to the rear.

A quick tear down of the gun and don't see anything unusual.  Putting the gun back together I find I don't have to depress the Feed Latch to insert the bolt, but the bolt does lock to the rear.

I suspect when the piece broke off the latch, it stayed in the gun (bolt won't lock to the rear) but fell out after I removed the bolt.  Gun worked but the part needed to be replaced.

Up and running with a new latch, but didn't stake it.  If not staked it will fall out every time you remove the trigger, but no harm done.

I have a staking tool, but have had on and off success using it.  I may glue it in place if it becomes to much of a bother.  Clean the slot with alcohol, use a Metal Epoxy Adhesive, apply pressure. I have a pair of mini C clamps that will do the trick.