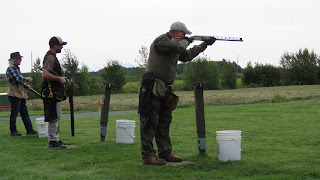 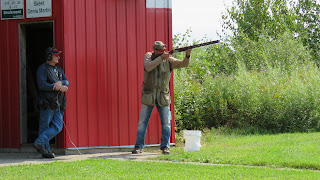 Two trap fields and one skeet field.  Nice crowd in attendance.  Shoot went on for most of the day and with people coming and going no extended time sitting around waiting to shoot.

You chose what you want to shoot first (trap or skeet) and when finished with one you return to the desk and squad for the other.  Worked well!

I shot trap and skeet, but didn't stick around for trap doubles.

Hotdog, homemade fries, and a soda for lunch.  $3 Canadian.  Fries filled half the plate.

A well run shoot. Hats off to the volunteers.

No traffic, nor any issues crossing the border, going and returning.