After spending Saturday AM at the Gator club I dropped in on the Florida Challenge (25 minute drive).

Sunny, 85 degrees, and humidity.  Hard on referees without shade.  At various clubs I've seen ref's bring there own beach umbrella and even pop up tents to protect from the elements.  If I was hiring ref's I'd suggest same.

Since the last Florida Challenge the pole barn used for meals and award presentations was enclosed. 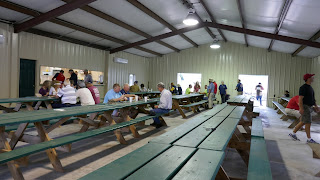 As the usual the club used the 850-yard rifle range as it's north course (main event) and the other two permanent ranges, one for the other main event course and the remaining for the dedicated small gauge course.

Also, the club puts up a temporary 5-Stand for the NSCA event. The club has two permanent 5-Stands.  One elevated and one at ground level, but leaves them available for practice.

I see I'm not the only one who misses a target on the easy stations.  John Woolley missed one when shooting 4 pairs while I was filming.  I walked over to the next station and Bill McGuire missed one shooting 4 pairs.  Unlike those shooters I can't afford to miss the so called easy targets.

I was worn out halfway through the north course.  Heat just took it out of me and I wasn't even shooting. Made it to a parcour but just barely had the energy to hold the camera steady.  A long (and slow) walk back to the vehicle.

Blue skies and little if any wind.

Voice release working well.  A few broken targets, but that was the exception.

I was trying a camera I don't normally use for video and it seemed to work well.  I still go to my camcorder for slow motion shots.

A couple of shooters didn't like me being on the line with camera. I try to stay out of the way and keep out of sight of shooters with mounted gun, but I guess it didn't work for them.

A hard bunker to film shooters (and targets), as elevated and doesn't leave much room for other then shooters and scorekeeper.

Before I get started this use to be one of my favorite clubs to visit.

An old club that needs to invest $$$ into its infrastructure.

Old target counters still working, machines still throwing targets, but the club is run down. I wouldn't even hazard a guess the last time a dollar was invested in other then keeping machines running.

If you happen to visit after a rain be prepared for mud and standing water (nothing trucks of fill couldn't address).  The one elevated stand they have is in need of a rebuild. Station #14 is long past its prime.

Overall, a property that can't compete with the other sporting clubs in the region.  Before this years visit I talked to two different couples that I ran into while shooting sporting and asked if they had shot at WW Sporting? Both answered yes, but indicated they wouldn't be returning. I didn't press them on why.  As a side note I'm always asking shooters what's there home club and what regional clubs they visit.  If they don't mention a club I usually recommend a visit.

When we first started shooting in Florida we had two regional choices.  WW Sporting and Bradford.

Through the years; Amelia Shotgun Sports opened, the Jacksonville club (long known for its skeet and trap) opened two sporting clays courses, and Saltwater's in St. Augustine opened (two sporting clays courses).  Amelia was starting to get a little run down but new ownership has invested the $$$ and now a modern club and a club with a fresh look.  The Bradford club always seems to be beefing up its facilities.

I don't know the long term plans, but unless the owner invest the $$$ it's not looking good for the long term viability of the club.

I filmed on Sunday.

Weather was warmer then usually for this time of year.

Referees did an outstanding job.

For the first two squads, field #10 had machine issues.  Don't know if they were resolved as I departed before the next squad went out.

Women shooters may or may not have been the best shooters score wise, but overall excellent technique.

Jacksonville a fine looking club! A club you'd want to bring your friends for a day of shooting. Skeet and trap shooters be sure you check out the non-member prices before going out.

Posted by Lost Target at Tuesday, February 20, 2018 No comments:

A nice turnout in response to the clubs invitation to the public (and members in general) to come out and see changes made.

I saw a number of long time members, but more importantly a number of first time shooters.

Owner Jim Muller spent most of the day on station #1 going through the fundamentals of shotgun shooting and also having new shooters take several shots at targets before going out on the course.

I didn't count but I think a minimum of ten stations with referees were available for those signing up for the Open House Shoot.   The referees/advisors I observed went beyond the call of duty assisting new shooters.

We passed on the Open House manned stations and shot the stations without referees.

A free lunch was offered, as well as live music.

Posted by Lost Target at Tuesday, February 20, 2018 No comments:

Club is under new ownership and our first visit since early last year.

Let me start by saying when we departed we had a good feel about the club.  A good mix of target presentations and zero issues with target release or targets.

Interior of the club house has been redone and old target stands removed.  Where in the past you would find two stands within several yards of each other (one station) you will now find only one stand.

The club provides three machines at each station.  The release has buttons for four (4) machines.

We enjoyed having three (3) machines per station.  Machine three (3) the harder of the three.  Experienced shooters can mix with newer and casual shooters with everyone enjoying the shooting experience.  I watched a few squads and they seemed satisfied shooting targets from machine 1&2 and for the most part not spending much time on machine target #3.  If shooting IC choke may I suggest you switch to a minimum of LM if you shoot #3 machine targets.

You can walk the course or rent a cart.  The club sells ammunition and offers gun rentals.

We were at another club in the first part of February with a larger footprint.  The stations at that club seemed too close together and seemingly lack of imagination on machine placement and target presentations.  Amelia on the other hand with a smaller sporting footprint, seemed a more comfortable course to shoot and target presentations well thought out (and more enjoyable).  Let me put it this way. We will not be making a return visit to the other club, but will be making a return visit to Amelia Shotgun Sports. 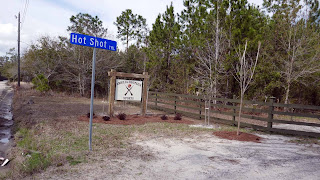 Less then ten minutes from the I-95 exit. 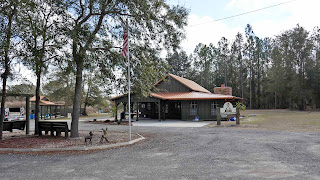 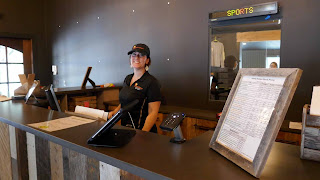 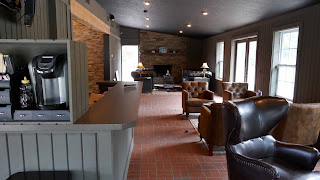 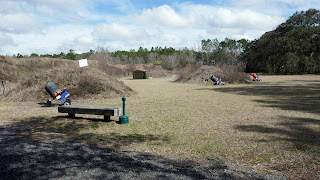 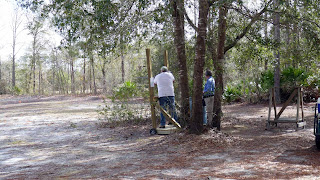 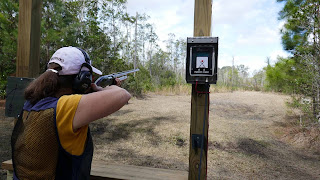 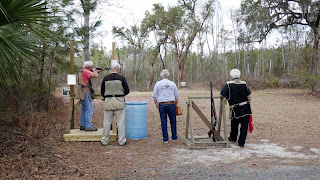 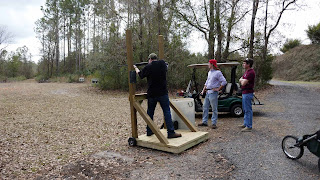 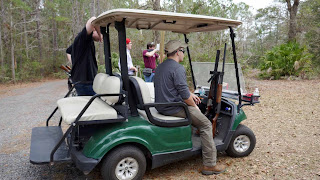 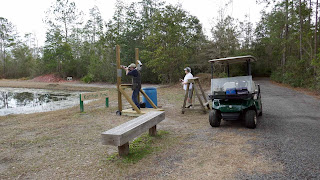 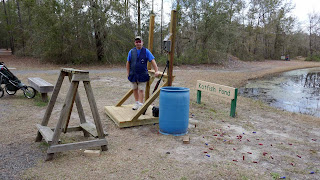 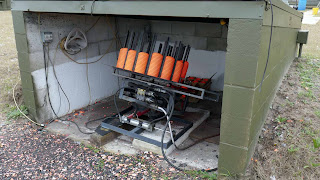 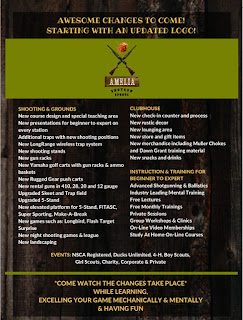 Short video of Heide hitting a pair of targets.

Posted by Lost Target at Saturday, February 10, 2018 No comments:

Just a hair on the cool side at the start, but ended up in the mid 70's. 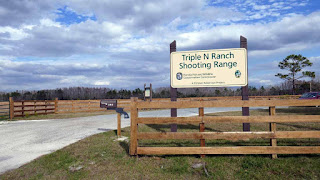 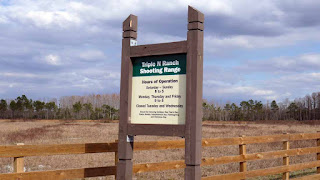 Three mile drive from main road to the clubhouse (25mph). 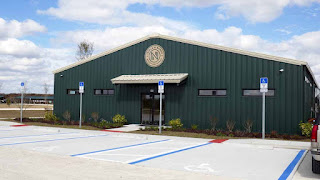 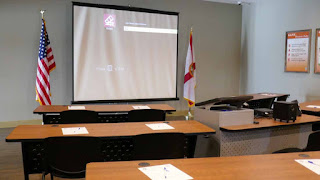 As first time visitors we had to watch a 17 minute range safety film.  It loops throughout the day. 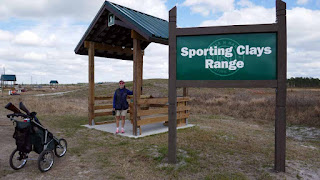 We decided to walk but recommend renting a golf cart when temperatures get on the high side.

No water on the course. 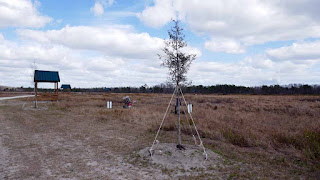 Many trees planted and in ten years..... 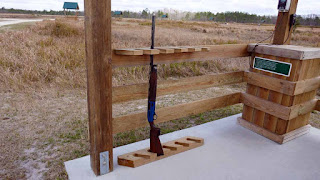 Hadn't seen a gun rack with the top and bottom holders cut at an angle before. Awkward at first placing guns in the rack, but worked well and a smart design. 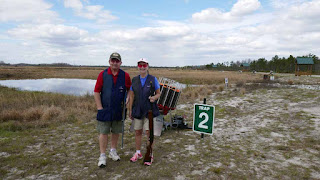 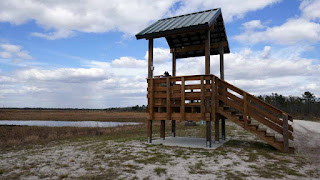 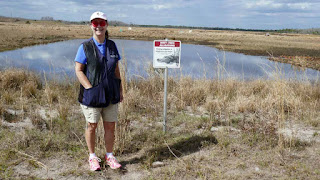 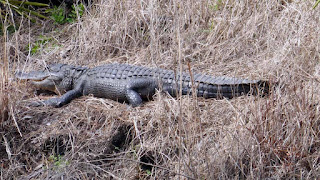 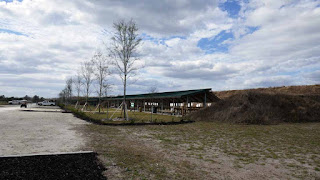 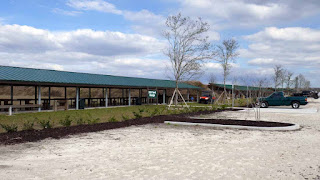 Short video of me and Heide hitting a few targets.

Many machines placed near the shooting stands along the road (reminded me of the old days when we used hand released targets).  May ease restocking, but they need to get the majority of machines out into the fields and spread them out to increase target presentations.

Could an issue be that stations are to close together and can't put the machines where they need to be or just easier for reloading by keeping them near the road?

19 stations sounds great in theory, but I think poorly executed.  Maybe the planners were thinking it would be great for charity shoots and overflow days, but not what I was expecting target wise from a brand new course that had its grand opening last November.  Maybe the nineteen station course needed to be set on a 1 1/2 mile track instead of one mile.

I suggest the club abandon 5 of the 19 shooting stations (leaving 14 stations).  I would take the ten machines and target counters and double up 5 stations (4 machine superstations).  Would work well for practice and with the empty spaces from the abandoned stands, allow for getting machines out into the fields (and smartly spaced).  If having a registered shoot, adjust the course as needed.

The club has plans to install a 5-Stand.