Back in the saddle again!

Cataract surgery completed in both eyes.  Doctor gave me the OK to resume shooting.  Eyes testing at 20/20 but won't receive a final prescription until mid September.  I still need reading glasses. 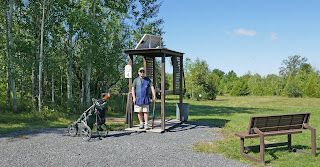 We went shooting today.  The last time I shot targets at the La Roue du Roy my wife had to tell me the machine numbers, as I couldn't read the letters or numbers on the signs : (

Targets really stood out even though I was just using a set of cheap sunglasses.  Got tired about halfway through and had to slow down a bit.  Going to take awhile to get back into shooting shape.

Hearing aids next on the agenda...

The past weekend was great.   I took video/photos at both the L'Acadie (trap) and the Roue (sporting) shoots.  Clubs are about a 35 minute drive from each other.

I found both shoots to be well run and shooters having a good time.  Saw more then a few people that I haven't seen in some time (my first time at L'Acadie this year).

The Quebec Trap Provincial in 2020 will be held in June, the week after the Vermont State shoot instead of in August.

Olympic bunker trap tournament this weekend at L'Acadie.  I plan on dropping in on Sunday with cameras.  Expect a lot of slow motion in the video as bunker targets almost impossible to see on a sunny day.

Cancer fight going well.  Had a few setbacks.  Earlier this month I had the beginnings of renal failure and received six bags of IV fluids over a three day period.  Good as new.  Also, my bodies reacting to the cancer drug and having to take steroids to take away full body aches and pains (almost couldn't walk). Seeing the doctor on Thursday to see what the game plan will be in regard to steroids (not good for me to be on).

I have doctor in Albany that has been keeping an eye on me.  He was the one that guided me through my medical odyssey at the Albany Medical Center this past winter.  He telephoned me and has set me up to see a surgeon in Albany to remove the cancer from my left kidney (right kidney was done in February).  We consult in mid September and I suspect an operation in October.  A major operation and not be able to do any heavy lifting for a month or so.

We didn't travel to Florida last winter for obvious reasons.  Heading south once again this winter but for a shorter period.  Three or four clubs I just have to make a return visit.   Also, we like to hike and have one or two trails we like to hit.  My wife has told me more restaurant visits this year : )