Attended the annual Underhill Rod & Gun Club Turkey Fun Shoot this past Sunday. The club is located in Westford, Vermont.

An early start as a snowstorm was moving in. For me, the trip starts with a ferry ride across Lake Champlain. 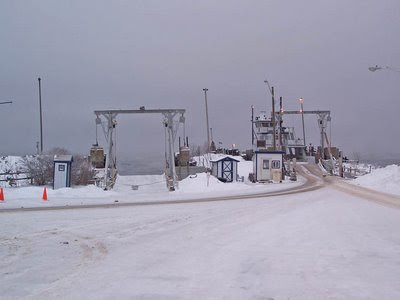 Snow fell throughout the day, but for a short period the snow stopped. Wind was never an issue! 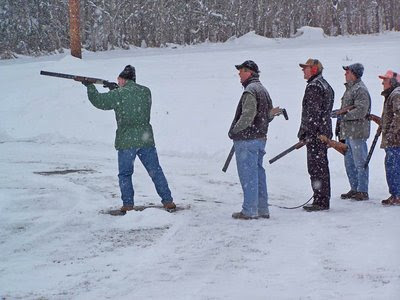 The trap event consisted of 25 singles and a round from the 20-yard line. I passed on that event. My back has been acting up and with the cold weather I did not want to push it.

The club has a pretty good 5-Stand, I believe 9 machines. Luck of the draw on when you shot, as visibility at times was not that great. A 50 target event, with ten targets shot per station.

I learned my lesson from the shoot at the Montreal Club the previous week and wore a heavier coat. I popped chemical hand warmers in both gloves and never had a issue with the cold. Some may not like wearing muffs for hearing protection, but an excellent ear warmer...

The roads in Vermont left a bit to be desired on the trip home. On the New York side much better driving conditions.

On NY I-87 the right lane was cleared down to the pavement. The passing lane had been plowed, but was still covered with snow.

I was perfectally happy to stay in the right lane.

A white SUV passed just as I entered the interstate, obviously in a hurry. Just before my exit I saw the same SUV laying on it's roof, off to the left side of the road. A number of cars had stopped to lend a hand...

Why the price difference?

Sporting Clays took over the club

I came across a talk board posting where once again someone was complaining that Sporting Clays shooters took over the club and there discipline was not being supported.

You could replace the word Sporting Clays and replace it with skeet or trap and see the same statement several times a year on various talk boards.

Sour grapes and not a fair statement!

I can almost guarantee a lack of skeet and/or trap volunteers is the main reason the skeet or trap programs are lacking and not because sporting clays shooters took over the club.

If a discipline has four or five volunteers willing to work shoots, the club has shoots, if not, no shoots or leagues!

Some clubs are heavy with skeet volunteers and some not, the same can be said about trap and sporting clays volunteers.

To expect a handful of volunteers to support all shoots for all disciplines held throughout the year is not realistic.

I have yet seen a member run club turn down a shoot or league if four or five volunteers stepped forward who were willing to do the work. They could hold any type of shoot they wish, registered or fun, no mater who was running the club.

If you can't get the people you shoot with weekly to volunteer there time to support a league or shoot, why should the other disciplines support you?
Posted by Lost Target at Saturday, December 13, 2008 No comments:

Would your gun club pass an EPA inspection for lead, target debris, and spent shell disposal?

Is this your club?

- Tests revealed surface soil contaminated with levels of lead, arsenic and antimony that were in some cases more than 100 times the acceptable levels.

- Shotgun pellets, casings and brass shells were found on the ground and in burn piles on the shooting areas.

- Club to examine drainage-control measures because of the nearby Swiftwater Creek and wetlands.

- A burn pile of shells and other waste materials was found off one trail.

- Plastic wads and shells were littered over a shooting station and firing area, and a waste pile of clay pigeons was found adjacent to a station firing area.

- Shotgun shot had accumulated to "a point that is impacting the underlying vegetation,"

Posted by Lost Target at Saturday, December 06, 2008 No comments:

Hosted by the Montreal Skeet Club.

This event will be open to the first 80 Canadian residents and will consist of Sporting Clays, Trap, Five Stand, Trench Trap, Skeet, International Skeet, FITASC and Super Final.

Open to Canadians Only. 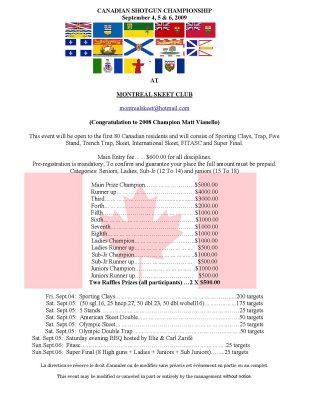 Jack Krouskroup updates on preparations for the first ATA Florida chain shoot to be held at Flagler. The club has undergone a major exspansion of ficilites in the past 18 months. 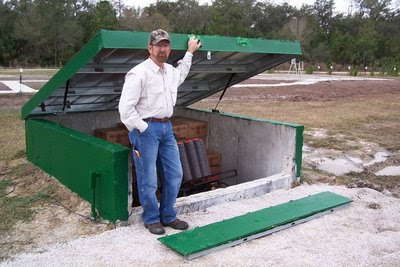 The 5 regulation trap fields are complete and operational.

Jay Bagelman and Don Kerce have arranged for vendors to attend our shoot. One of our premier vendors will be "Shooter's Solutions" for any gun fitting or gunsmithing needs as well as custom ear protection. Our club plans to promote our vendors thru local adds and Jay's semi weekly radio interviews.

Flagler will have 10 camping spots available for our chain (30 amp), we recommend our other guest stay at one of our club members facilities, Thunder Gulch Campgrounds. They have a fine resturaunt and bar facility as well as nightly entertainment. Ask for John or Marie. Print off the special discount coupon from the net or mention the Flagler Chain to receive a discount.

The club is 38 minutes northwest of Daytona Beach and 35 minutes from St. Augustine, Florida.