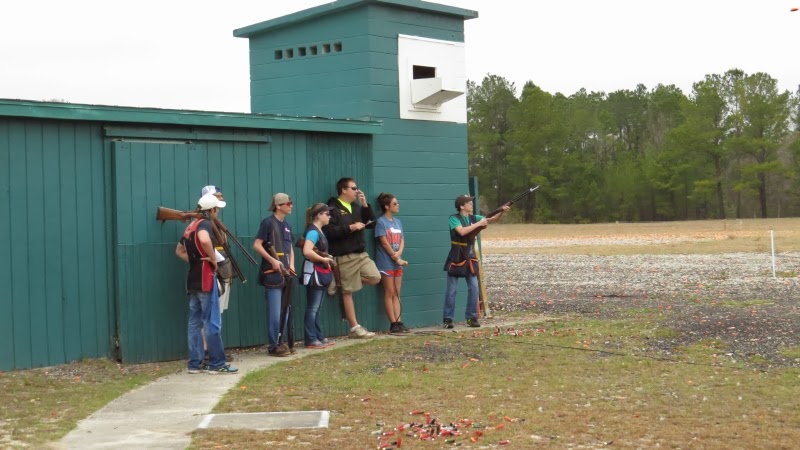 Prior to the start of the shoot I saw some singular skeet practice.  Targets were being smashed, but I was thinking, you need to be practicing as part of a squad, as not the same rhythm when practicing by yourself.  At the least, slow down the pace. Sure enough, not a good round for those I saw practicing by themselves.
Many minutes can go by from station to station before it's your turn to shoot again. A very slow sport with a full squad, for sure the slowest of the clay target disciplines.  Maybe, I just had a lucky hunch in my observation, maybe not, but I can assure you I would have received the roll of the eyes if I offered any advice!

The random skeet release delay was working well and I didn't observe any no target calls.

Travelled to Gainesville on Saturday to check out the 2014 Southeastern Regional Bunker Trap Championships being held at the Gator club.

On my drive to the club it was all fog until ten miles from the club. 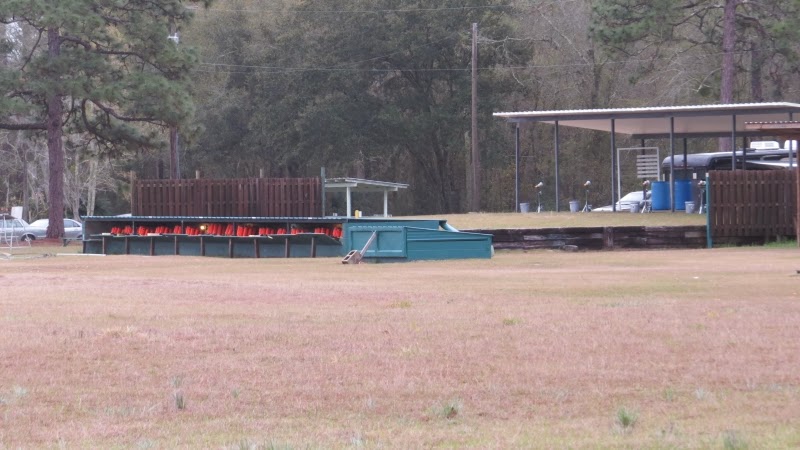 Overcast at the start of the shoot, but the skies started to clear and the targets were easier to see.

The bunker seemed to be running well and I didn't observe any problems with the voice release or computer.

A tradition of mine.  On the way home from visiting the Gator club a stop for strawberries is a must. 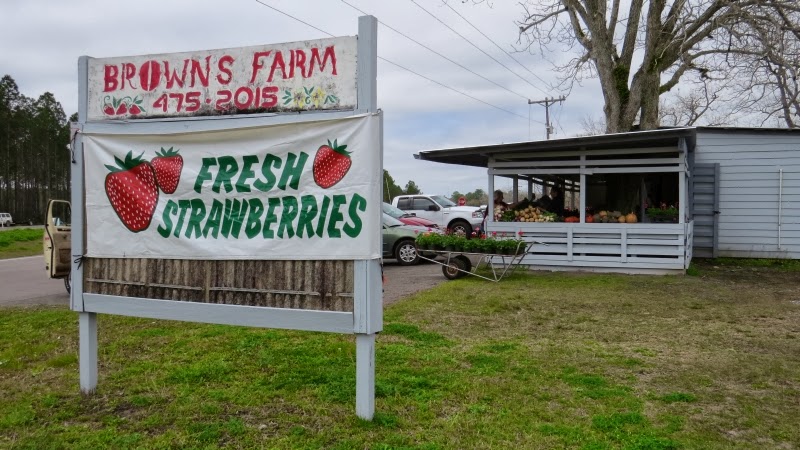 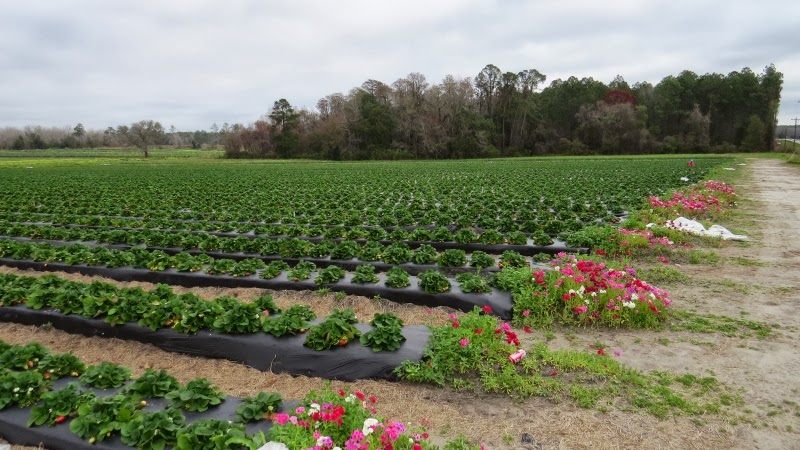 We volunteered to be trappers for Friday's sporting clays shoot held at Amelia Shotgun Sports.

Only a few minutes after we parked the vehicle the skies opened and it poured and poured, to include thunder and lighting. 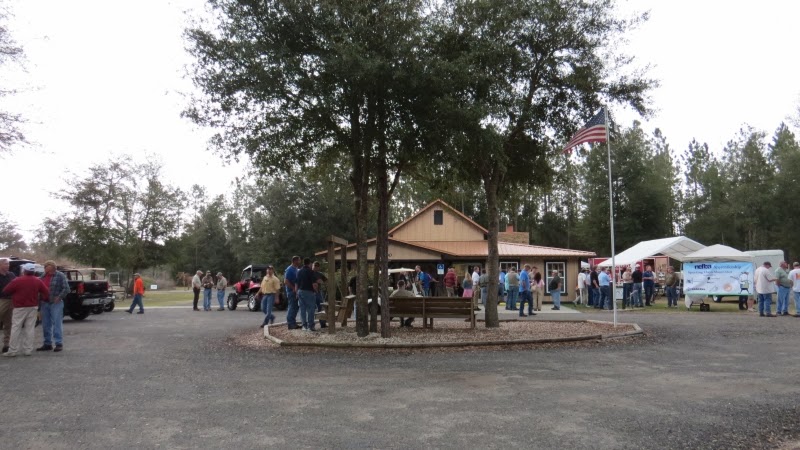 The club just before it started to rain.

The rains lightened and the shoot started after a short delay.  The rain ended about an hour into the shoot.

Good eats and all seemed to have a good time.

* We visited the club today (Sunday) to shoot practice and sure enough it started to rain when we had about three stations to go.  I see they had to delay the start of the Daytona 500 car race due to the rain. The weather fronts that used to sweep in and hit northwest Florida and Georgia are now traveling further south and bringing rains to parts of Florida that is outside the norm as seen in past years.

Florida shooters and skeet shooters from various states were in attendance.  Northeastern states were well represented. 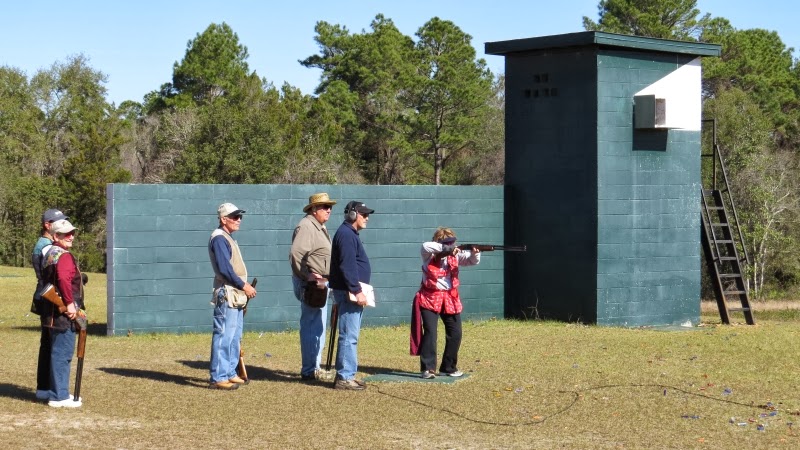 Unlike ATA trap in Florida that is hit and miss in regard to attendance, depending at what club is holding a shoot, northeast Florida skeet shoot attendance is something to see.  Palatka, Jacksonville and St. Augustine consistently see a minimum of 100 shooters, year after year at major shoots held during snowbird season.
For those not aware, the ATA Trap Chain Shoot concept is no longer, as the numbers were not there.  Other reasons may be given, but shoot attendance numbers at some clubs was disappointing.

The local airport parachute club as the usually was doing jumps and not unusual to see parachutist making jumps though out the day.  Some shooters would wait a second or two before calling for a target, especially if a chute or two could be seen at the hold point, but for most they ignored the chutes and called without delay.
In the past for me I usually thought it was pretty neat to see the chutes in the air. If they were low in the sky I would wait until they finished dumping air to hit there landing area, as at that time they would pick up speed and it could be distracting, depending on the station you were on.  You cannot see them land as trees blocked the landing area.

The club welcomes visitors. Unique at this club is your responsible for opening and closing your field on practice days.  From putting the cord away, topping off the machines, and locking the houses before departing.  A system that works well.  Near the entrance they have an area for dropping off empty target boxes.  Of course if another group of shooters wish to use the field you were using, it becomes there responsibility. 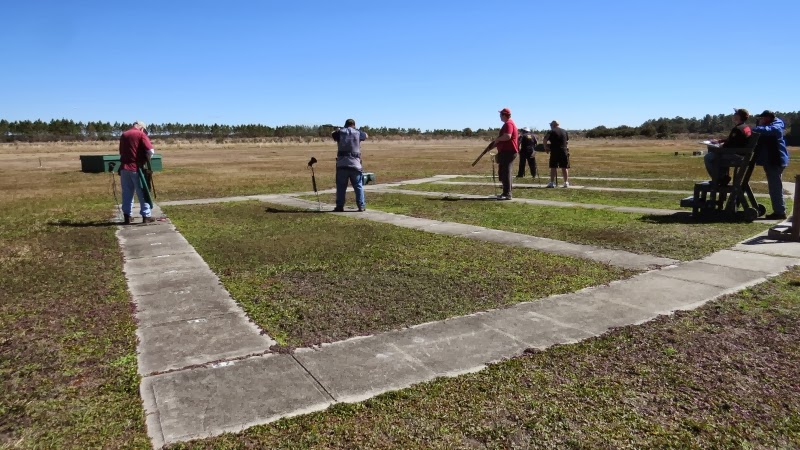 A cool start to the day but it warmed.

A nice turnout.  I think the club was pleasantly surprised on the number of shooters!

A nice touch.  The club has started naming individual events after the winners of the previous monthly shoot.  If singles in the previous month was won by John Brown, the shoot flyer would call the next months shoot the John Brown Singles Event! The do the same for Handicap and Doubles.

A no fooling around shoot with no waiting around.  They put out three squads and we were off to the races!

My wife Heide beat me in singles.  Seems she likes shooting on windy days.  I've arranged for her to give me lessons next week : )

I won a few bucks in 20 yard handicap.

I posted a video and photos.

The used Remington 1100 breech bolt assembly that I purchased off eBay to replace my cracked one arrived.  Slightly used.  I didn't see many wear marks, but it did need a cleaning.  An overnight soaking in BreakFree and it looks as good as new.

The wife and I spent the day scoring targets at the Flagler Big 50 Trap Shoot.  A light wind kicked up towards the end, but nice shooting weather.  It was 72 degrees when we departed.  The club is having it's monthly targets only shoot this Saturday and I should have a few photos to post.

Before we took to the chairs we shot practice trap.  On the last round I grabbed the wife's gun by mistake (she was done for the day).  Didn't feel like walking back to the vehicle and shot it.  Ended up with a 25, my first in some time. Maybe she'll let me borrow it from time to time  : )

The NAS Jacksonville (military installation) is in the process of installing a second combination skeet / trap range.  If you've ever shot at a one field club, you can imagine how everyone is looking forward to having the second field.

Amelia Shotgun Sports is having a benefit sporting clays shoot on the 21st and expecting 150 shooters. We volunteered to be trappers for the day.

I keep hearing that one, maybe two clubs are seriously considering installing Olympic style bunker traps in Florida.  The Gator club is the only club in Florida at this time that has a 15 machine bunker. They have a shoot coming up.

Shooting the Florida Challenge at Bradford Farm this year, a first for me.  I've been at the shoot a few times, but just to take photos.  Shooting a  Prelim, FITASC (100 targets), small gauge (28 gauge) and the 200 target main event.  The only thing I'm not shooting is the 100 target 5-stand. A friend is attending and we're shooting together.

If you saw my wildlife photos, the snakes have been identified as Dusky Pygmy Rattlesnakes. I posted a photo on a snake forum and had my identification in no time.  They are in the viper family of snakes.

Posted by Lost Target at Tuesday, February 11, 2014 No comments: 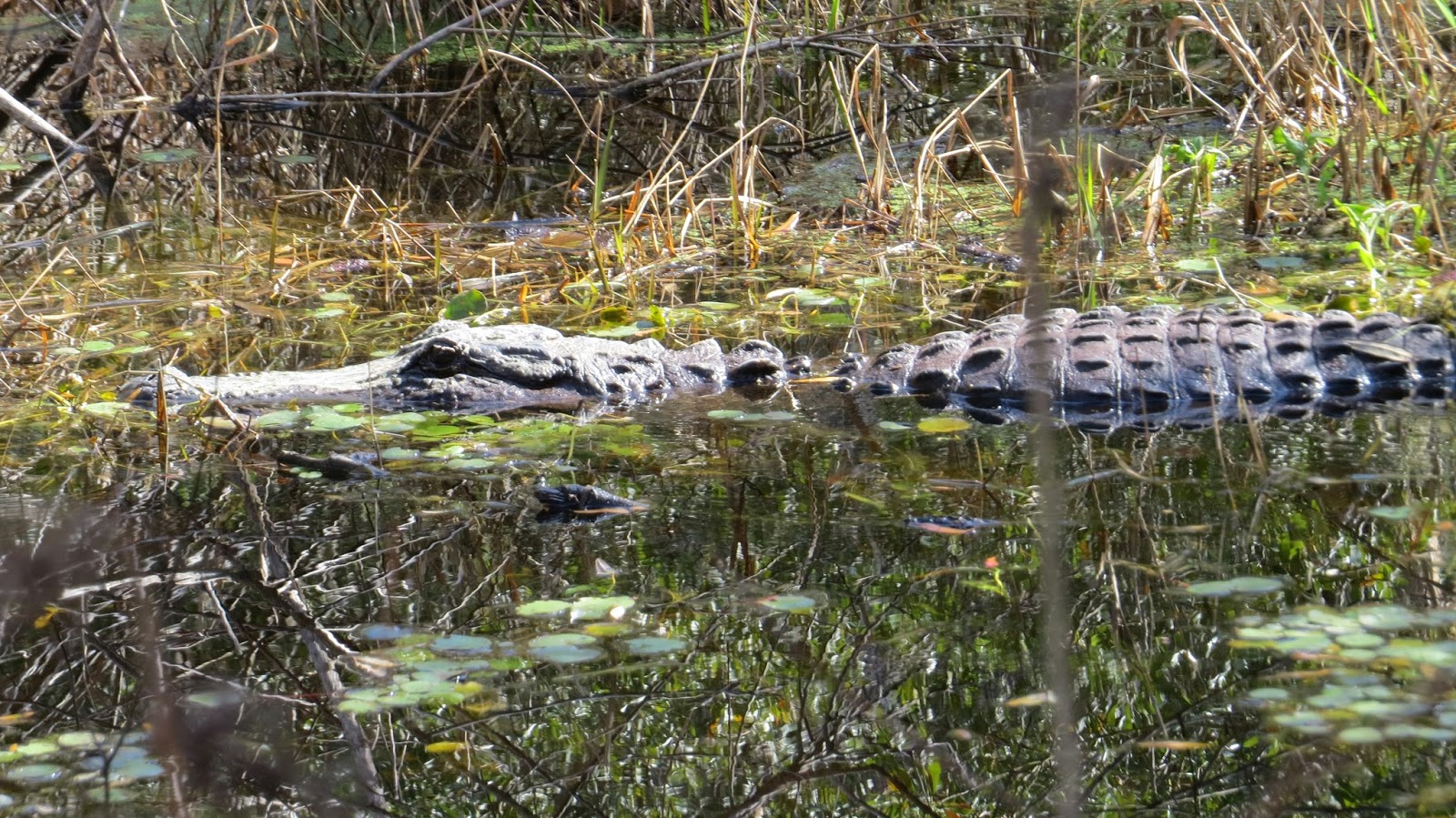 A catch 22.  You want to be quiet so you see wildlife, but being quiet means that you may run into something that you rather not!

A warm day. 83 degrees when we returned to the vehicle.  We had the area to ourselves. Except for a few game wardens we only saw two people and that was 15  minutes from the vehicle upon are return.

A bit of rain in January and not all pathways have drained this first week of February.  We had two short stretches (less then 100 feet) where we had to walk through about 8 inches of water.  On either side of that particular stretch it was wetlands and more water, so no choice to go around.  We made sure we made plenty on noise when walking that part of the trail  : )

Posted by Lost Target at Tuesday, February 04, 2014 No comments: