Every two or three weeks we've been driving over to the Sportsman’s Club of Franklin County in Vermont and weed whack the three skeet fields and trap house. It's about an 1:20 drive.

We've been shooting at the club starting back in the 80's.  Back in the day the club use to have registered skeet shoots and we always tried to attend.

No one asked us to weed whack.  We saw it needed doing and pitched in. When we load the vehicle for shooting practice, we also load the weed whackers

With two of us we knock it out pretty fast.  Battery operated machines so are only cost is the string.

My wife also likes to weed around the tree's and bushes near field #1. 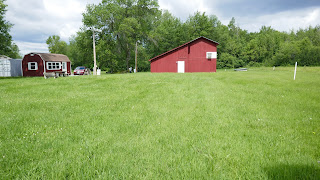 The clay target part of the club is going through a rough time at present.  Club use to open on Thursdays but no longer have volunteers.  Sundays only. Club use to have fun shoots and league shooting, but no longer. Hopefully someone with a Passion for clays will join the club and run with it.
Posted by Lost Target at Friday, June 10, 2022 No comments:

Very nice turnout.  Beretta and Browning each had a booth.

Fun shoot. I think the course was a little harder than it needed to be based on shooters present.  Thinking more hunters than serious shooters. I'm thinking two hard stations to make the good shooters work at it and for the rest, run up the scores.

Everyone seemed to enjoy themselves.

I think if they paid a couple of helpers, it would have made it a little easier on those running the shoot. Just my observation. Saying that everything that I observed ran smoothly.

Food and drink were excellent.  Way too much to eat and I don't think I could handle more than the one drink I had.

Three kits (fox) leaving in a drainpipe under my driveway.

Dough Whiton is taking ammunition pre-orders.  When I talked to him (I asked what he had that was cheap) he had Remington Gun Clubs and RIOs.

He will be at the club for the Vermont State Trap Shoot only on Sunday.  Doug.whiton@comcast.net

The arrive can app has been updated.  It now retains information including COVID vaccine dates.  Also retained the information for my wife.  Made it really quick to complete.  A much need improvement, especially for those who travel frequently to Canada.

Try not to purchase gas at the US stations along the border.  Maybe $0.20 more expensive a gallon then twenty minutes further south.

We shot a few rounds of skeet today at the Sportsman's Club of Franklin County (Vt). We're thinking the first time we've been at the club in six months, maybe seven.

Also, the last time we shot skeet. The first round wasn't pretty. At some point the club purchased new target release for the skeet fields. Nice crisp release.
My gate entry card didn't work. Someone heading to the pistol range let us in. Emailed when we returned home. The club had a software upgrade and for whatever reason they missed my card. Was told it is now activated.
Four or five times a year we try to do are part. We throw the weed wacker in the vehicle along with a few other needed tools and do what we can.
Today we weed wacked the three skeet fields and trap house. Also, around and under benches and gun racks. The wife did a bit of weeding. 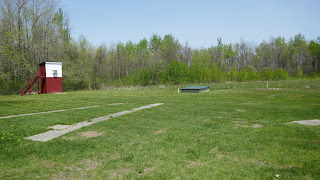 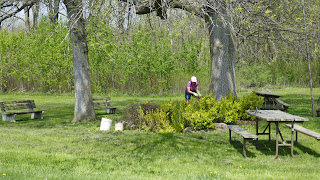 Underhill had its first sporting clays shoot of the year on Saturday.  Cool with a breeze.

Canadian shooters for the first time in 2 1/2 years as the border had been closed.

A few uphill walks on the course.

Won a Beretta Extreme Plus

After procrastination on my part, I had the firearm I won in a lottery drawing at the Jacksonville club shipped. 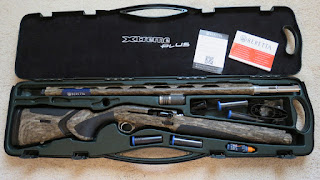 Besides the lottery ticket it cost me shipping and FFL fee.Five chokes. 28" barrel.Not something I have a use for and will be disposing of it unfired.
Posted by Lost Target at Tuesday, May 10, 2022 No comments:

We visited Quebec on Friday.

Did the ArriveCAN app before we headed out.  You need COVID vaccine dates (and photo) and driver's license ID number. You need to know what crossing you're going to use.  It also asked where you're going to stay if you test positive.  It would not take my answer, return home.  I gave an address of a motel.

You'll get an approval on your phone within the hour.

Asked at least three times if I had cannabis. Was asked if I did the ArriveCan? Said yes and he started typing on the computer.

Those who follow me know I have a Canadian Firearms License.  Pulled over and they checked my firearms.  Debate on if you need trigger locks or not when traveling.  I just put them on any time I'm headed north.

If you're just going up for practice your only allowed 200 rounds.  Obviously, whoever wrote the rules doesn't know that a case of shells is 250 rounds.  If you're going to a shoot and have a flyer the 200 shells does not apply.

Friday was the start of a Canadian holiday.  My vehicle was the only one headed north. Traffic going into the USA at the single land crossing I used was backed up at least 1hr 30min if not more.  Children were out playing on lawns along the road.

Used the main border crossing I-87 on my return.  30-minute delay.  Traffic was thinning out by time we hit the booth. Showed my custom paperwork for the firearms and released.

Vaccinated travelers may not be entirely off the hook for the test requirement if they're travelling with unvaccinated children. That's because unvaccinated or partially vaccinated people over age four must still show proof of a negative antigen or molecular test to enter Canada.

And all travelers — vaccinated or not — must still submit their travel information using the ArriveCAN app or by registering online within 72 hours before arriving in Canada.

Although they no longer have to worry about taking a pre-entry test, vaccinated travelers may be randomly selected to take a COVID-19 test upon arrival. 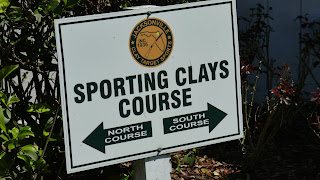 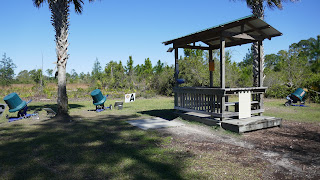 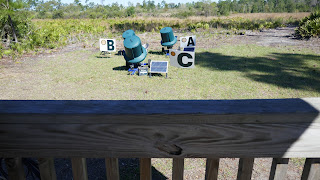 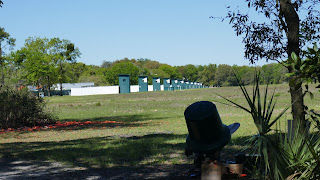 Beautiful club.  Back in the day I've shot registered skeet and registered trap at the club. Just loved the background.

Years past they used a coin system on the skeet/trap fields but converted to the card system.

If getting ready to attend a major sporting shoot, look elsewhere.  I talked to a couple of club shooters, and they loved both courses. Members happy, club happy...

We ran into a couple of shooters who were trying to figure out a rabbit shot. One said he just shot a 95x100 and returned to re-shoot the rabbit.

They told us to go ahead. We shot the station. The rabbit had speed and a bounce or two, but hittable.

Gave some advice on how to address a rabbit but basically, they rolled their eyes. Watched him shoot twice, both times behind.  We drove on...

Target setter has a tendency to group machines close to stations.  I gather it makes it easier to reload or service machines.

The stations with three machines, we shot all three.

I think it was on the South course.  They had one machine with a target with speed, going from left to right, but away from you, at an angle.  Most enjoyable target I shot on either course.

Ran into a skeet shooter who just purchased lead.  Told me $55 a bag.  Two other places he knows of in Jacksonville were selling it for $62.

A quick look at the ammo.  If I remember correctly, $11 something a box.

The club has various shoots so check before you make the drive.  Also, check prices.  Not kind to non-members. 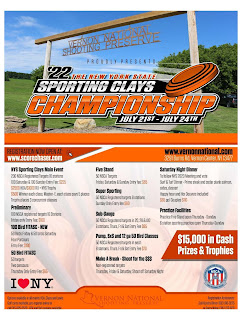 We visited Bradford Sportsmen's Farm (FL). The club has three sporting clays courses, as well as pistol and rifle to include a 850-yard rifle range.

The club host the Florida Challenge each year.  Challenge targets are something to see. The club has holding major shoots down pat. 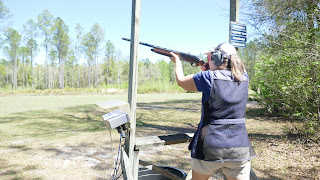 We shot on what I call the two tournament courses.  The third course is used for small gauge during major tournaments and from what I've seen in the past, a number of benefit shoots.  I don't know if that is still true in regard to benefit shoots, as it's a bit of a walk to get to and I recommend a cart. Anyway, past experience the course is skeet in the woods.

We rented a cart.

Having a good time until we got to the north course. Big disappointment. Target presentations were soft.  I was thinking halfway through, wasting my money.  My wife noticed.  She only shot two shells at a number of stations. I asked when leaving if they were having a benefit shoot on the North course anytime soon, but the person at the desk couldn't say.

Overall, we shot 28 stations.  Two shots each at some stations, much more at the more difficult.

We were the only clay target shooters at the club during the time we visited (Thursday). I think we were out for three hours.

Didn't have any machine or target issues.  Did have to play with the card at times to get the counter to go live.  Seeing the card issue at a number of clubs this year.  Having to put it in the holder three different ways before it registers. Don't remember this in past years. Could be the systems are showing there age.  Have no idea if new cards would resolve.

We visited the club to shoot once a year.  If it was more than that this year, it wouldn't be worth the drive.

The Walmart gas station in Starke was selling gas at $3.99.  I was running on empty. The norm for stations in the region average $4.19.

Amelia Shotgun Sports (Yulee FL) today. The club is a couple of miles south of the Georgia border.

14 stations. Three machines each station. Most of the stations have two stands. They also have a five-station starter course for beginners.
A couple of places to sit but deep into the course.
I heard someone asking about ammunition. $11 and something.
When we arrived, ten or so vehicles in the parking lot. By the time we signed in and rented the cart only one vehicle remained.
84 degrees when we departed. Ice cream sundaes at Dairy Queen ended the day. 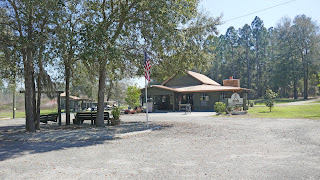 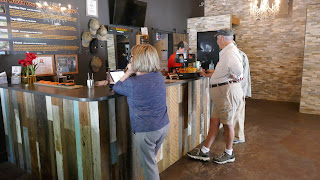 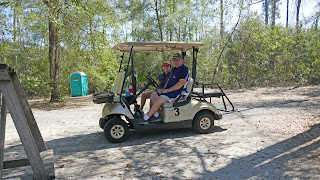 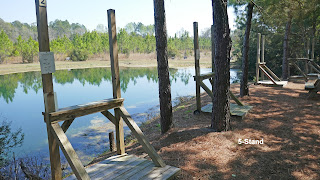 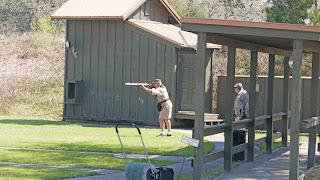 Over 200 shooters in attendance for the two-hundred target main event at the Bradford Sportsmen's Farm (FL).

Blue skies and sunny.  80 degrees in the PM.

Shooters had a bit of a hard time picking up targets with the low morning sun and cloudless morning. The PM squads had a much better time of it on the same targets.

Ammunition was available.  I saw Challenger shells and asked the price.  $10 a box and told a very thin profit.

The ladies working the desk had it down pat.

Can't say I saw any machine or target issues.

Returning in a few weeks with the wife.  They have three sporting clays courses and two 5-stands.  One of the sporting courses is skeet-in-the-woods and will take a pass.

Joe Potosky - The Lost Target
Please consider making a donation if you wish to help with the cost of maintaining the Lost Target web sites. Credit Cards accepted!