Friday saw temperatures in the 60's.

I shot the 28 gauge in the sub gauge event.  Eight stations, three machines per station.  What sub gauge you shot determined what two machines were utilized per station.  A nice presentation of targets.  Those who shot pump were required to shoot on the prelim course on dedicated stands.

Years ago we ran all over the region eating at various restaurants, but in recent years we take all are meals at the Lehigh restaurant near the motel we stay.  An old style eatery; clean, generous portions, and easy on the pocketbook.  The Super 8 motel and restaurant are no more then 15 minutes from the club.

Saturday brought cool temperatures (lucky to see 50 degrees, if that) and on and off rain in the morning.  We shot the Prelim in the AM in mostly rainy conditions.  Thankfully, I had the contents of my closet from home with me and had plenty of warm weather clothing and rain gear to chose from.

I did a prelim re-shoot in the PM and by time the rain had stopped, but a bit of mud on the course and the wind had picked up.  Still cold!

We shot the 11:30 main event rotation on Sunday.  No rain, but cool, windy, and overcast at the start.  I think (sun wise) the 2:30 rotation had the best view of targets.

Three days of shooting and I didn't observe any problems with machines.  The few times I saw a delay was with machines being refilled.

A couple of stations were set for shooters with faster reflexes then I posses (maybe it's the eyes). I found myself rushing.

With the sun out all targets could be seen, but when the sun was behind the clouds, oh my! At times very dark on the course.  Targets on some stations were hard to see or were not seen at all.  Saw three shooters call for a target and they never saw the first target.  Not uncommon to see targets being hit or shot at very late into the flight path.

Three videos posted and a large number of photographs for you viewing pleasure.

When I attend a shoot at Rochester Brooks a stop at Beikirch's is a must.

The company is a seller of firearms, reloading supplies, and ammunition.  They deliver supplies to many clubs throughout the region.

In conjunction with the sporting clays shoot at Rochester Brooks (Spring Deuce) the club had Fiocchi shells on sale for $59.90 per case.

They had other shotgun ammunition on sale for the three days of the shoot, but I just listed what was of interest to me.
Posted by Lost Target at Monday, April 28, 2014 No comments:

The annual Good Friday trap shoot was held at the Valleyfield club in Quebec last week.  A shoot that I try to attend, as usually the first clay target shoot of the year held in Quebec and a chance to see people that I haven't seen in some time. 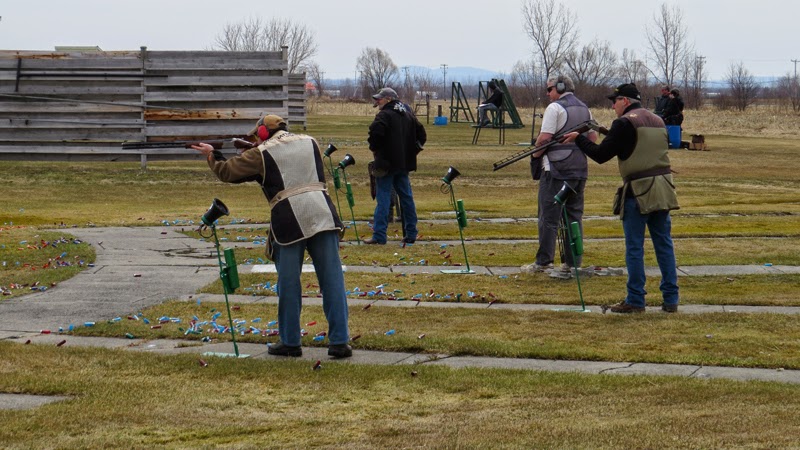 Crossing the border is part of my travels when I shoot in Canada.  I haven't shot in Canada since December and was wondering if crossing procedures had changed any, and as a holiday, if traffic at the crossing was going to hold me up.

No traffic at the small crossing I was using.  Before I could hand over my ID and firearm credentials, I hear, "going shooting today"?  I didn't recognize the person processing me, but he recognized me. After checking my credentials he did have me pull the vehicle foreword a bit and had me open the back of the vehicle and did a quick visually scan.

Cool, overcast, and wet grounds at the club. I was hoping I could shoot without my coat on, but after giving it a try, just a little to much on the cool side.

30 Shooters in attendance. No problems noted with the voice release and no machine issues.

In singles, the shooter to the left of me didn't have a shell catcher or deflector. Hulls flying in front of me. After a few stations I got over it, as it didn't look like that I was going to be hit.  Talking to the shooter after the round he asked if his hulls were bothering me and if so he apologized.  It turns out he has been looking for a shell catcher. I gave him a suggestion on where he could purchase one.  For American readers, many companies won't ship firearm related goods to Canada, so it can be hit and miss when a Canadian goes shopping on the internet.

On the way home I found that my favorite ice cream stand had opened for the season and a stop was a must.

When I hit the US border, I hear, been shooting today....

Over the winter I had to shoot factory at a sporting clays shoot I was attending and picked up several boxes of  Winchester HS 28 gauge shells.

I know there was horror stories when the hull first came out, but if I remember correctly a change to HS hull design was made to satisfy those who reload.

Without making any adjustments to my re-loader (9000g) and mixing old hulls with new I loaded four boxes with the following results. 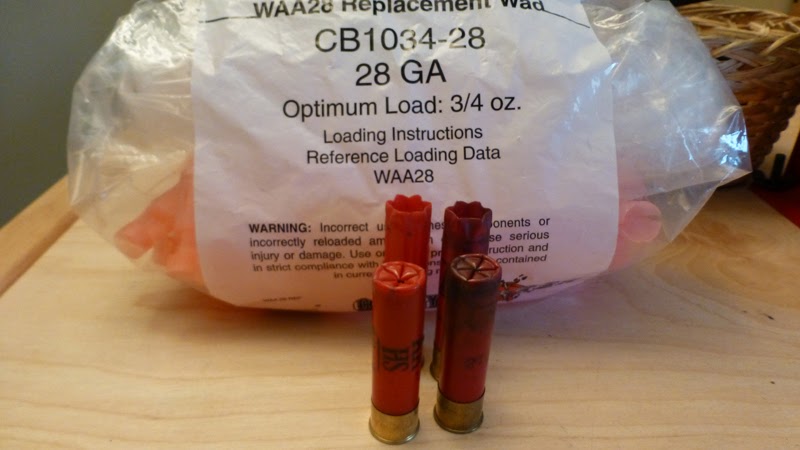 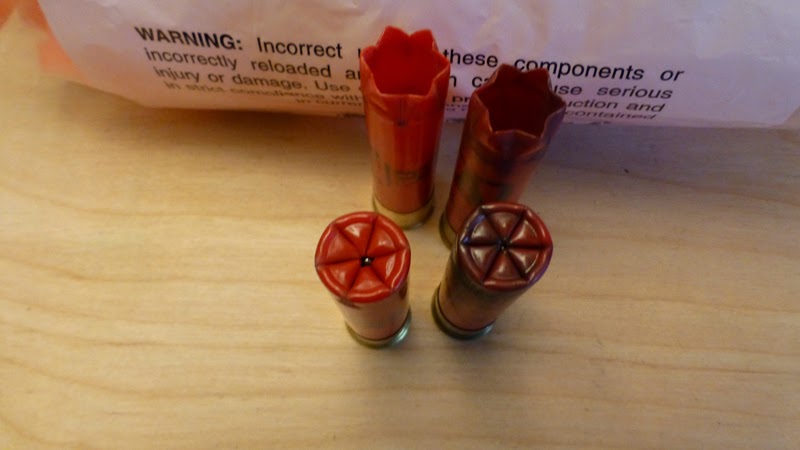 Include the original UPC Codes cut from each qualifying box of ammunition purchased. Photocopies will not be accepted.

Rebate offer is limited to one offer per household. Rebate offer valid in the U.S. and Canada.

Do you have an early model 9000G MEC re-loader and having problems with the large capacity primer feed, in that no matter the adjustment, the primer drop is slightly off?

If so, a possible solution.

Years back I was a 4-gun skeet shooter.  Reloaded all four gauges and on occasion still do.  Started out with a MEC Jr. in the 12 gauge, but soon moved on to the Grabber series.

All came with the old style chain activated primer feed.

When the large capacity primer feed came on the market I quickly upgraded.

The .410 and 20 gauge primer feeds worked without issue right out of the box.  However, the 12 gauge and 28 gauge re-loaders were tricky to adjust and getting a primer to sit properly took a large amount of patience.

The primer tray on both had be positioned to the far left in order for a primer to drop into the receiver hole on the re-loader.  So much to the left that the primer feed slide had little purchase with the actuator arm, just barley engaging.  Over time the right side of the feed slide on the 12 gauge primer tray became worn and no longer engaged the actuator arm.

I ordered a new tray, but before installing I added washers to move the actuator arm slightly to the left. The feed slide and actuator marriage now looked more like the picture in the installation guide and I had primers hitting the center of the hole on the re-loader.

I just modified my 28 gauge re-loader. 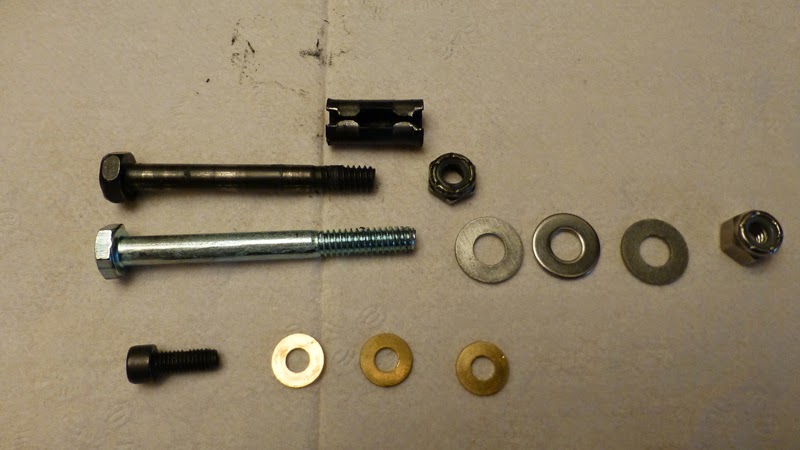 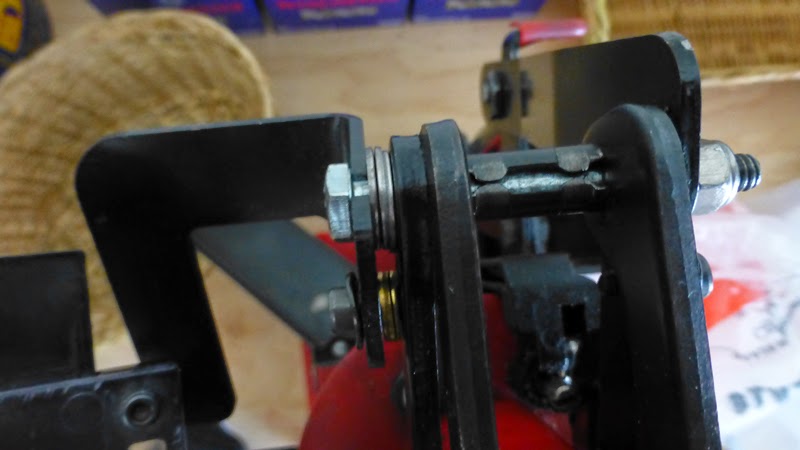 Beside the washers I installed a longer bolt.

I don't see any difference in the construction of the 12 and 28 re-loader virus the 410 and 20, but I don't think a coincidence that I had trouble with the early model 9000G's in regard to Primer Feed installation and not with the re-loaders purchased at a later time.

A few years back I switched from DLS to cable and saw an increase in wireless bandwidth speed, but the increase was not what I expected.
Something I could live with (I run everything wireless).  The cable connection was much faster then my old DSL service and for a time not a big deal, as long as I had a good upload speed and could watch movies without interruption.

Anyway, time to upgrade my router. I purchased a Linksys AC 900 Smart Wi-Fi Wireless Router. The specks showed the router had twice the speed of my old router and was duel band.

Following the simple directions I unplugged my old router and plugged in the new.

No need to attach a cable to your computer to setup the new router. Through the magic of wireless technology I brought up the router setup page on my computer screen.  I was directed to unplug the modem for two minutes and then power it back on.

A message showed that a software update was available. It took a couple of minutes to complete the automated process.  I checked the box to allow for future automatic software updates.

I was given an option to change default sign in information. I changed the network name and wireless password to what was on my previous router so I didn't have to change other wireless sign in connections in the home.

After a short wait my devices were connected throughout the home. All but my wireless printer was working.

I couldn't remember what button on the printer to push (also a scanner and copier) to send a single to the router to be recognized.
I had to look at the printer directions.  A button that has several uses was identified.  A push on that  button and a push on the blue button on the rear of the router was all that was needed.  They did a handshake and I was set to go.

In speed testing I found that 37 mbps download was the average speed (was averaging 12 mbps on the old router).
I  checked (and rechecked) speeds against various servers across the country. A couple of times I had speeds of 42 mbps.
Upload speeds did not see much change, but upload speeds are severely limited by internet providers and my previous router was almost at the set limit, but I did see a slight increase.

I have at least the same range as before. My laptop worked flawlessly in the backyard, well away from the router.

Spring? Not in my back yard!

Spring may have come to the south, but not at home. 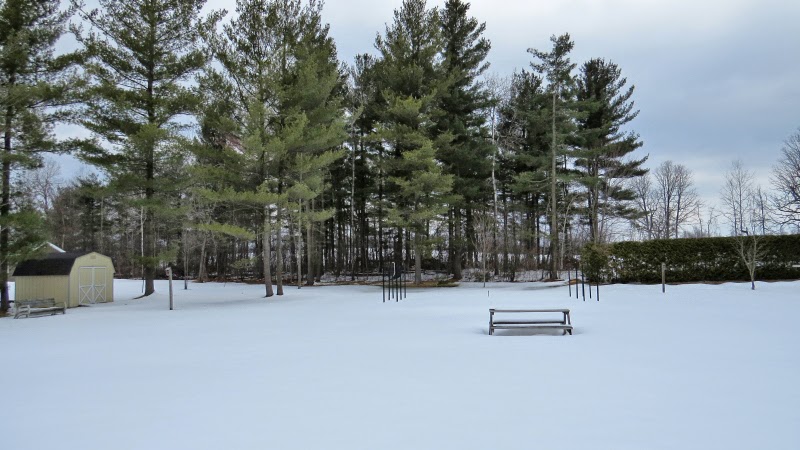 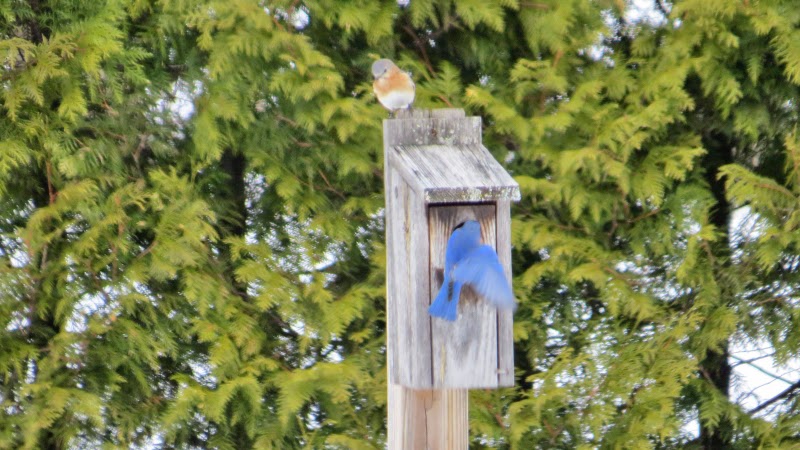