Shooting trap with my Beretta A400 Xcel Sporting Shotgun

Shot my A400 in trap for the first time.

Four rounds of practice, modified choke.  Two boxes of 1oz. Fiocchi's, a box of Rio's, and a box of Noble Sport.  In the neighborhood of 1200 fps loads and no failures to feed or fire.

This was the test to see if I was going to need too install an adjustable comb.

Other then shooting over several targets seems to be right on the money. Adjustable comb not needed. A lighter gun then the 1100 I've been shooting and going to get some getting use to, but so far a happy camper.

No sore shoulder nor bruised face.

The T&S Shell Catcher worked like a charm.  Unlike the shell catcher for the 1100 , the one made for the Beretta doesn't slide during the round.  A nipple on the shell catcher and a small indent on the A400 makes it so. Just line them up, slap in place and your ready to go.   Covered in a plastic material so no marring the surface. 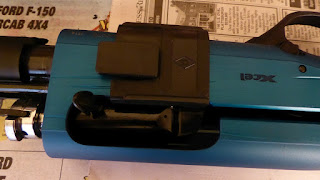 If you change out the A400 bolt handle for the larger Briley one the shell catcher won't fit.  You will have to change the bolt handle back to the original when you want to use the catcher.

Cleaning the Beretta is something else.  A simple wipe down and a touch of oil and your set to go (some areas your not to oil).

Your suppose to be able to go 2000 rounds between cleanings. Google "cleaning a Beretta A400", as several excellent YouTube videos posted.

Back from the club and my wife's 1100 is broken down and covered in Breakfree.  I usually let it sit for a few hours and then a wipe down and reassemble.   Nice to not have to go through that with the Beretta.

My wife took a two shots with the A400. She was able to comfortable look down the barrel and broke the two targets she shot at.  She commented it was lighter then her 1100.  The stock was a little long. Don't know if a thinner pad would do the trick or wood would have to be removed.  Something you need to think about if you get the Beretta KO recoil reducer, as wood cannot be removed.  Aftermarket would be the way to go if you need a reducer and a shorter stock.

I wasn't planning on shooting registered trap with it until I put a few cases of shells through it, but a shoot this Sunday and that will be the gun I'm shooting.

It's been a few years since last attending a shoot at the Kayaderosseras Fish & Game Club, Ballston Spa, New York.  The club is ten minutes from the Saratoga horse track, near the county airport.  We came down to shoot the singles.  They were also offering handicap and doubles. 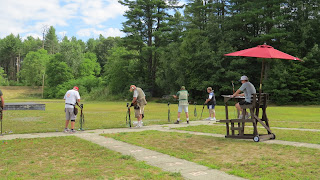 No messing around on shoot start time. They can never be sure on how many will be in attendance and as the trains in Germany, when they say 9am, they mean 9am.  Can't find a shooter, start without!

The background seemed in better shape then I remember, but maybe just that time of year.

I almost ended up doing dishes for a week, but a 25 in the last round allowed me to beat the wife by one target.

As at almost all the clubs we visit a friendly bunch running the shoot. Seasoned vets keeping score and if anything out of the ordinary happens on the field, they most likely been there, done that!

No problems with voice release or the machines/targets!

Five of us drove over from New York. 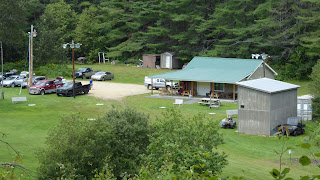 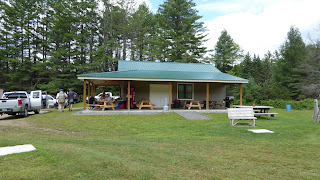 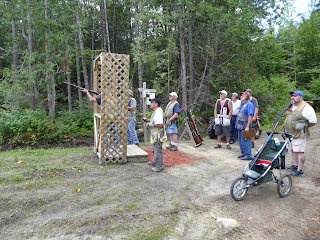 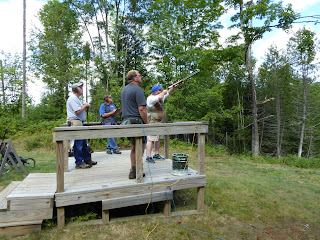 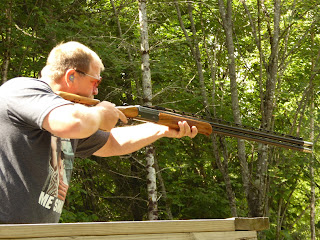 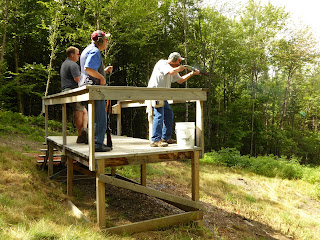 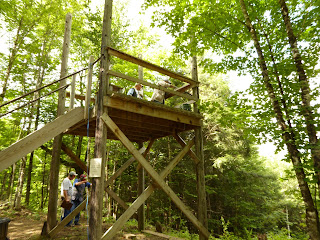 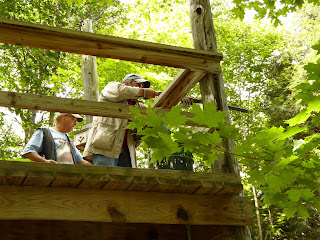 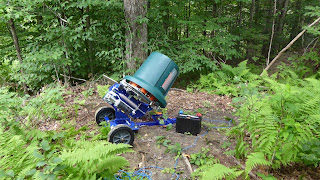 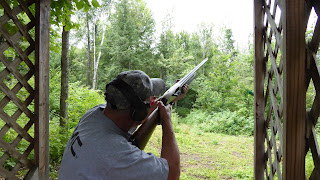 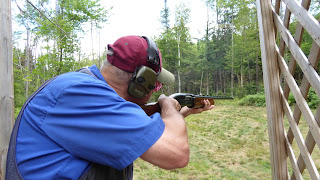 The club has retired it's hand traps. All trap machines are battery operated.

Targets were hittable with IC, but having a LM choke in your shoot bag is advisable, as the safe choice on several targets.

All in all a good day!

Shooting the Beretta A400 XCEL

Long story short. I'd purchased a new Remington 1100, but a big disappointment (do own several), sent it back and purchased my first Beretta!

I picked up a Beretta A400 XCEL on Friday and on Saturday broke it in at NEK Sporting Clays (Vermont).

The gun seemed to fit right out of the box and was anxious to shoot it. 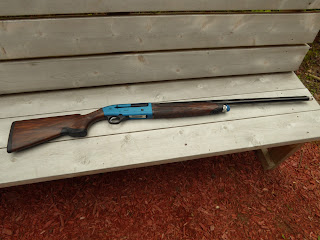 I shied away from the kick-off system, as the only way to shorten the stock is by purchasing a thinner pad (no cutting down the stock). I was told you also couldn't install an adjustable comb with the Beretta kick-off system installed.   Both options doable with third party installations. 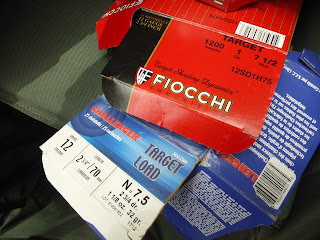 I shot a box of Challenger shells and then finished the outing with 1oz Fiocchi loads.

Recoil with both brands of shells was mild and not anymore noticeable then the 1100's I've been shooting.  No sore shoulder, nor a sore cheek and no need for a recoil reduction system and it seems a gun fitting.

Didn't have any failures to feed or fire.

The gun comes with three chokes.  IC, Mod, and Improved Modified.  I've ordered two additional chokes, Light Mod and Full and should receive them this week.  I shot the course with IC choke but at times wishing I had my Light Mod choke, as some of the longer hits were a little on the thin side.  Yes, could of thrown in the Mod, but didn't.

The gun felt good in my hands and well balanced.  A different swing then the 1100 (to be expected) and will take getting use to.

Shell loading is different then the 1100, but after several false starts never gave it a second thought by the end of the outing.

I also plan on shooting the gun in trap, but have to wait until the T&S shell catcher I ordered arrives.

I shoot trap with a flat shooting gun and as with my 1100, plan on shooting skeet, trap, and sporting clays with it.

I may opt to have an adjustable comb installed but will have to see how it handles on the trap range.

See you at the range! 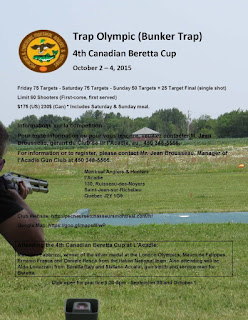 Remington let me down. Hello, Beretta!

We've had Remington 1100's kicking around the house going back to the early 70's.  A couple of 1100's are getting to the point where there pretty much shot out and time for a replacement.

Out of the box I see a noticeable spot on the forearm. I call Remington and they said they would send me a replacement forearm at no cost.

I receive the second forearm and it has the same spot. 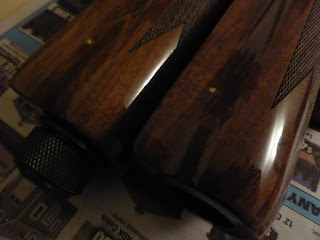 I call Remington and eventually I'm told that's just the way it is.  It turns out that's where a metal pin is placed in the forearm, but in the finish process their not hiding the wood fill. As far as Remington support was concerned this was acceptable. How, having a noticeable spot on the forearm fresh out of the factory is acceptable is beyond me.

Second problem.  The shotgun with a regular Remington 1100 trap barrel installed would not fire.  A second Remington barrel would also not fire.  I purchased the shotgun to use for sporting clays, but I wanted to be able to shoot trap with it.  A huge disappointment!

* With the sporting model you have to replace the forearm to fit a non-contour barrel.

I pulled this off the Remington website: All Model 1100 barrels are interchangeable within gauge with the exception of 20 gauge guns built prior to 1977.

Remington support could not tell me why barrels weren't interchangeable.  They suggested I purchase a 30 inch Lt. Contour Trap barrel.  Even if I wanted to go that route, none to be had and no time line when Remington would have any available.

To make a long story short, the Remington 1100 is no more.

I confirmed the T&S Industries Shell Catcher for the Excel works as advertised.  It will allow for use in trap.