Vandels cause closure of club (What's your club doing to protect itself?)

Tucked off Water Works Road in McAlester, OK just past Youth Lake, is a shotgun shooting range where gun enthusiasts have enjoyed  skeet shooting for a long time.

The range is now closed, however, due to vandalism. That repeated vandalism of property has proven too much for the Lake Eufaula Rod and Gun Club to keep up with.

“It’s a shame,” said Bill Nicholson, an administrative member of the club.

Nicholson said the club has always coped with vandalism at its ranges. However, recent vandalism at the range off Water Works has officials calling it quits.

Not the first club to be vandalized and not the last.

Several months back a club owner posted on a talk board that someone in the middle of the night removed a coin operated target system off one of the clubs fields.  They took the complete system.

So, what are the options for protecting you club short of having a caretaker live on the property?

Spend thousands of dollars to install a monitored professional security system.  Most clubs would bulk and I think an extreme solution unless your routinely targeted!

The simplest solution is to position several Trail Cameras on the property.  The newest ones have HD and even video.  Some you can actually hook up to the internet to transmit off site.  You won't stop the vandalism, but you have a good chance of identifying the bad guys.

Another option is HD video surveillance, especially if the club has internet access where data can be transmitted off the property (to the cloud).   Club offices with an IPOD can access the camera 24/7 and check on the status of the club.

Check out the latest trail cameras and video surveillance systems.

Posted by Lost Target at Thursday, October 29, 2015 No comments:

Canadian turned back at the border with firearm

ATF Form 6NIA
A shooter using the shoot invitation option was turned away at the border (Rainbow Bridge).  The purpose was to attend a Big 50 event.


The shooter did have the generic ATA letter, but no shoot invitation for that shoot. (Yes, some at the border will accept the ATA letter or a shoot flyer/schedule, but…)
A shoot invitation must be on organization letter head, listing the event(s), and addressed to the shooter.  A generic shoot flyer is not acceptable. (Yes, some at the border accept less)


Form Instruction: (2) An alien admitted under a nonimmigrant visa in possession of an invitation and/or registration confirmation to attend a competitive target shooting event or sports or hunting trade show sponsored by a national, State, or local organization devoted to the collection, competitive use, or other sporting use of firearms.
* In past conversations with ATF, fun shoots listed are considered competitive events. More than one shoot can be on the letter.


---
If you don’t need a VISA to enter the USA. (Read carefully the part on not needing a VISA).


ATF Form 6NIA (5330.3D)
Question 13. Were you admitted to the United States under a nonimmigrant visa?


Answers to some common questions for those who may be considered a nonimmigrant alien or for federal firearms licensees conducting business with nonimmigrant alien customers.
What documentation does an alien need to show U.S. Customs and Border Protection (CBP) when entering the United States with a firearm?


* No VISA required means no  need for a shoot invitation or hunting license.  I suggest you visit the ATF page and print out the Question and Answer and put it with your form.
---


If in doubt on the feasibility of using the No VISA required option (not all border people have been educated in this change to the law), the fallback is to use the Hunting License option. No shoot invitations required.
Posted by Lost Target at Saturday, October 24, 2015 No comments:

The anti-gun agenda.
Besides the call for Background checks and additional Gun Free Zones pushed by Bloomberg anti-gun groups in various states.
I can’t imagine under any situation where those with illegal firearms would get insurance nor stand in line at a store to undergo a background check when purchasing ammunition.  Easy enough to steal ammunition or have someone else purchase it for you.


As for smart guns.  If the states would get out of the way on proposals to mandate the market would take off.  As for now the technology is not 100% if you believe various reviews and a very expensive addition to any handgun.   Technology would improve and prices would drop if state governments would just stand aside and the spouse would make sure a smart gun was the first choice for home defense.
Real gun control.

If found using a firearm unlawfully....

No reduced bail, no plea bargains, no reduced sentences, no early release from prison, and minimum state sentencing laws for crimes committed with a firearm.

Posted by Lost Target at Thursday, October 22, 2015 No comments:

Browsing the isles of the local Gander Mt. I come across a sale on Remington Gun Clubs.

$70 is expensive for non-premium shells, sale or no sale.

I walk over to the shelves that hold single boxes of shells and find the same shells $.50 cents cheaper per box then those sold by the case.

I had a sale associate scan the single box and he verified the price.  I asked why they were cheaper then the advertised case sale and he didn't have an answer.

I think the $69.99 case sale was not advertised correctly, but as I wasn't interest in buying anyway I just walked away without making any further inquires.   Walking away, remembering last week that Dick's was selling RIO shells for $56 a case after tax.


If you haven't made a contribution to the club's legal defense fund yet and would still like to do so, you can take contributions during the clubs normal operating hours or by mail at:

Posted by Lost Target at Thursday, October 15, 2015 No comments:

Rio shells on sale at Dick's

I traveled to Vermont Wednesday to shoot at the North Country Sportsman's Club in Williston, Vermont.

Arrived before the club was open so visited Dick's Sporting Goods, maybe ten minutes from the club.

Thought it was Christmas as they had a sale on Rio shells, one of my favorite shells.

Cases of shells stacked on the floor.  No restrictions on number of shells purchased.

My area has a Dick's, but they just throw you a bone or two on sale of shells and availability.  Usually cases of shells not available, you have to buy individual boxes.  Sometimes the sales are not marked at the display and you have to ask if any sales.

The previous Sunday I was shooting in my shorts.

Saturday shoot day and wearing dungarees, gloves, and my winter shooting jacket. Windy and random sprinkles. If it hit 50 degrees it wasn't when I was on the course.  When we booked the shoot we were thinking high 60's and sunny fall weather.  Not to be!

We shot the sub-gauge event Saturday AM.  In the past few years they had three machines per station and depending on gauge you were presented designated target presentations.  This year two machines and two stands per station (8).  The gauge you shot determined the stand you used.  My gut tells me the two separate stands is the way to go, especially for .410 shooters and cuts down on the number of machines needed.

With rains threating we shot the prelim event in the afternoon.

A soft course (my opinion and based on what I see in my travels).  Been visiting the club for many years and the softest Rochester prelim course I can remember.  I enjoy breaking targets, but...   My head told me not the targets I would be seeing on Sunday and not to get cocky.

It started to rain at the last station (we were the last prelim squad).

Sunday main event (16 stations) brought sunny skies, temperatures starting out in the 50's, and little or no wind. The Sunday PM squad saw temps in the 60's. 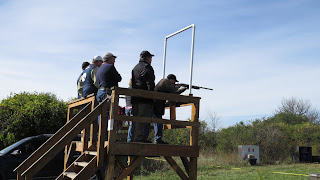 Targets were what you expect at a shoot of this nature.  A difference between night and day if you compared Saturday and Sunday targets. Challenging but fair targets! Boy, were some of the targets fast...

No machine problems that I experienced.  We had one machine that stated throwing a few broken targets but sorted itself out.  Most likely someone not being careful with handling targets.

I was shooting my Beretta A400 with Estate shells.  Don't want to get to deep into my shooting but I'm having a hard time with leads. The leads look so different then from the many years I was shooting a Remington 1100, especially on faster targets.  A few times I made a conscious effort to ignore what I was seeing and the target broke, even when I thought I didn't have enough lead.  Sounds easy, but going to take a bit of shooting.

What a joy to shoot.  Still can't get over how easy it is to clean compared to the 1100's I own. I've shot various cheap shells through it and haven't run into a shell it can't handle.

As always well seasoned refs, but did run into some who said it was their first time.  One adult ref told me he stated working the club as a kid.

The clubhouse has been undergoing major renovations the past several years and if you haven't visited in four or five years your going to be impressed.

The club uses Winscore.  Saturday scores were posted when I checked from the motel room Saturday after dinner.  Good job ladies....

The club is hosting the New York State Shoot in 2016.  I'm told the last full weekend in July.

The club is 15 minutes from motels.  A couple of home style diners near the motels and a MacDonald's.  After years of bouncing around the various restaurants, we eat at the Lehigh, maybe three minutes from the Super 8. The only complaint I have is the serving sizes are to large.  Major shopping area (and restaurants) 10 minutes north of the motels. Restaurants seem to be always crowded on Friday nights, so plan accordingly.

We stopped at Beikirch's (a retailer who supplies shooting supplies for clubs and the general public).  The only one ounce shells they had in stock were Estates.  All other shells they carried were 1 1/8.  No lead for sale. I had a list of supplies for rifle shooting they were not able to fill.