At a recent shoot I observed two very slow squads.  Not one or two shooters per squad, but every shooter on the squad.

It was agony to watch.  Shooters not ready to go when it was there turn.  Gun mounted for what seemed like forever before they called for a target.

Luck of the draw or they squadded as friends, I have no idea.  Shooters waiting to take the field when they finished were not happy campers. I'm sure not something shoot management is happy to see, as it can cause serious backups.

I read where two squads at the same shoot went out at the same time.  One was a three (3) man squad and the other a five (5) man squad.  50 targets per field.  Shoot 25 targets with a break to get your second box.  Finish the 50 and move to the next field.  When the 5-man squad finished shooting the 50, the 3-man squad was just starting the second 25.

I think we can all put up with a so called slow shooter, but more then two and it's not trap shooting.

I blame it on the shooters home club.

Why, no one sitting down with them at there first few registered shoots at the home club and giving them a few pointers before they start traveling to various clubs?

I suspect a number of shooters out of the comfort zone of there home club, feel rushed at other shoots and soon stop shooting registered targets.

1. Prior to the preceding shooters gun being fired.


If you have to towel off, do it before it’s your turn.


Once gun is mounted, pause a second while looking down range to let eyes adjust and call for target.


Note:  When you mount your gun and if you have to adjust the mount/sight picture, then your gun doesn’t fit properly and you’re wasting seconds each time.  You should be able to mount the gun repeatedly without having to make adjustments.


After you fire your gun.


May I also add? The break between 25’s is not to have a talk session or visit friends.  Retrieve your box of shells, maybe take a drink of water, towel off and back on the line.


You will run into shooters who have their gun mounted before you call for your target.  They are the fast shooters.  Don’t be imitated by them.
Shoot the pace, as seen in the below video and don't look back.

Posted by Lost Target at Thursday, September 22, 2016 No comments:

I attended the singles championships at the Northeastern Grand American at the NYSATA Home Grounds in Cicero, New York. 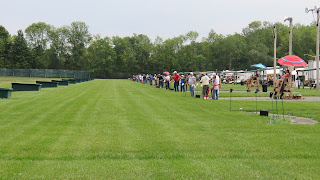 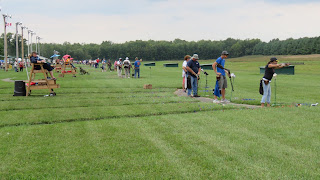 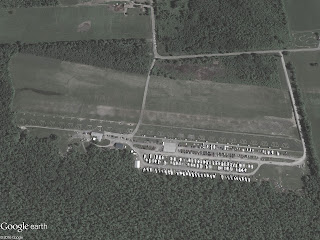 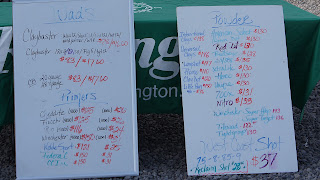 
I watched the weather forecast for a week leading up to the shoot.  The forecast went from rain, to cloudy and a chance of rain in the late PM.  Saturday saw sunny AM skies with wind and cloudy (overcast) with a short sprinkle in the afternoon.  After the sprinkle, winds calmed.
We didn’t pre-register, as a last minute decision to attend.  Highly recommend you pre-register.


We had a machine break on the third round in the first 100.  They ended up replacing the motor.


No problems with the voice release and as long as the sun stayed out, no problem with the background.


Targets popping in the AM sunlight.  Not so visible (orange) in the PM.  I’m sure many shooters don’t need the sun, but for me to see the target clearly I need the orange to pop.


Running around with the camera I saw some targets that stayed flat or dropped due to the wind.  One shooter had three droppers in a row. Ouch! Watching the flags during the day, it wasn’t a consistent wind.


The club was throwing White Flyer bios.  I shoot a lot of Lawry targets.  What a difference in breaks.  My 1oz. #8 Estates will consistently smoke a Lawry target at 16-yards.  Not so with White Flyer.  I will have to rethink ammunition when shooting White Flyer bios.  Maybe 7 ½ and/or 1 1/8oz.  I really hadn’t noticed it in the past, but the last three or four clubs I shot at were throwing Lawry and the difference in hits was noticeable.


The squad had a good rhythm.   Again, running around with the camera I came across a few squads that were ridiculously slow, and I’m not talking just one to two shooters, the whole squad.  I’m sure by time it was your turn to shoot, you were thinking about anything but shooting.


Parking was non-existent in the Bridgeport part of the club unless you arrived early.  A long walk if you had to park near the vendors.  I’m told there use to be more parking, but for whatever reason the grassy areas used in the past were not available.
No deals on ammunition.

I suggest you watch the video full screen, via YouTube.
SHOOT PHOTOS/VIDEO

Posted by Lost Target at Monday, September 19, 2016 No comments:

Is your local gun shop easy pickings for an afterhours robbery?


The latest smash and crab robbery that I came across netted 60 firearms.   A gang of ten being the culprits.


Alarms alert the police or owner, but bad guys long gone before they can respond.


Security camera’s usually only catch video of masked robbers and do little to identify.


Lights and more lights a given.


Security gates or rolled down metal shutters when closed is a must.


Vehicle crash barriers around the perimeter of the store.  A common practice is to steal a vehicle and crash it high speed through the store front.  In and out in under 60 seconds.


I suspect the answer is a third layer of security that may be cost prohibited for the small store that’s been in business for what seems like forever, but almost a requirement in this day and age.


A separate walk-in room, within the gun shop, where weapons are not only viewed, but also locked up overnight.   A room built to whatever sized that is needed, but in any case a separate secure room.


The room would be built using concrete block (or poured) with a walk-in vault door.  The floor and roof also protected.  Build it as a separate show room if it makes sense.


Looking around the internet finds a SnapSafe Vault Room Door designed to fit a rough opening of 38"x 82" (standard 36" door opening).  I would imagine larger sizes can be found as needed.


Interior motion alarms a must.  In and outside the room.


Any such room can be broken into if given enough time, but the idea is to slow down the thieves and give police time to respond before they gain entry into the vault area.
Posted by Lost Target at Wednesday, September 07, 2016 No comments:

Mobile Phones Mobile phones or hand-held communication devices many not be used by athletes on the firing lines or shooting stations.

Shotgun Ammunition The use of colored wads is prohibited. Only transparent or translucent wads may be used. Strict enforcement of maximum shot charge limits (24.0 g +0.5 g tolerance) will continue.

Shotgun Butt Stocks The lowest point of the butt stock or toe of the butt plate may not be more than 170 mm below a horizontal line extending from the bottom of the shotgun action.

Shotgun Finals The present finals format with a semifinal and two medal matches will be replaced by a progressive elimination format where the sixth place athlete will be eliminated after 20/25/30 shots (skeet/trap/double trap) and the gold and silver medal winners will be determined after 60/50/80 shots. 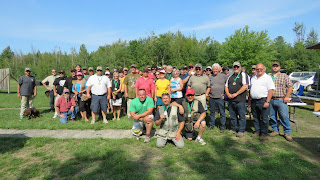 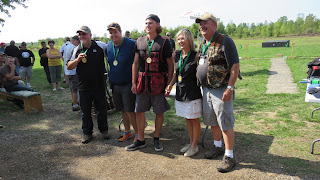 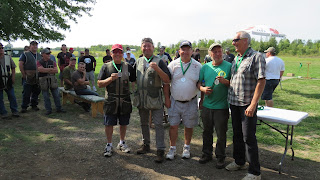 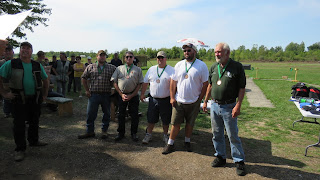 3rd
You couldn’t ask for a better turn out.
Blue skies and just a slight breeze.


Registration opened at 8:30 and the shoot started at 10am.  A good number of shooters getting in practice before the start of the shoot.
A 50 target trap shooting event. Two fields (Pat Traps).

Hamburgers and hot dogs for lunch.


Medals awarded to the top three teams, as well as a trophy to high women and man.  A nice number of random draw prizes awarded.
A volunteer club and all hands were on deck.  Hats off to the men and women who ran the shoot.


The club has been at its present locating since 1963.  The club has had good times, as well as bad through those years.
Approximately four years ago it was going through a bad period.

I’m not aware of the full story but a group of shooters stepped forward and took steps to turn the club around.

It took a few years, but two Pat traps purchased with wireless voice release.  Heavy equipment was brought in and much needed work to improve the property was done.  A small rifle range was installed.  I’m sure the club house needed work.  A nice size parking lot easily handles a large number of shooters.

A large shipping container was purchased for storage of targets and equipment. As recently as last month trees were bull dozed in the area past the distance stakes on field 1 and 2.

I’m told plans to build a covered porch off the clubhouse is planned for next year.

A good number of the shooters (and family members) at the club are bilingual.

The first few times I visited the club not many accomplished shooters.  Now, a good number could hold there own at a registered trap event.

I don’t often visit the club but I dropped by last month and two squads shooting and 18 guns in the gun rack.   I had to switch fields, but easily shot three rounds with little delay.  When needed they will open a third field (Winchester machine).

Posted by Lost Target at Monday, September 05, 2016 No comments:


1. Bear a “Return Service Requested” endorsement.
2. Be sent by Priority Mail Express (with “signature required”) or Registered Mail.
3. Include Signature Confirmation service or insured mail service (for more than $500) requiring a signature

In the past USPS was usually a money saver when shipping. You may want to revisit shipping via FedEx or UPS.

432.4 Indemnity Claims
When indemnity claims pertaining to regulated firearms are filed for loss or damage to contents, claims will only be paid for complete loss under either of the following conditions: a. The regulated firearm has been lost, or b. When the mailer has provided reasonable estimates of firearm’s value and of repair cost from a reputable dealer, and the repair cost exceeds the declared and/ or actual value of the firearm at the time of mailing.