You bring your firearm and the club furnishes the ammunition (included in the price of the shoot).

Don't know if the club is receiving a deal on ammunition purchase (Challenger) for the shoot, but instead of 1 1/8 shells I suggest 1oz shells (less felt recoil) especially with the number of gun fit issues I saw.

All level of shooters from beginners to the more accomplished.  Class shoot so all had a chance on taking something home.

Skeet had a slow start, but picked up in the PM.

Hot dogs and fries for lunch.  One order of fries can feed two...

Posted by Lost Target at Friday, September 21, 2018 No comments:

In case you missed it...… Club Valleyfield & Club Huntingdon

Two man teams shooting flurries of targets from duck blinds.  Load three.... One of the clubs most popular shoots and always a sign-up waiting list.

Club selects squad leaders and squad members selected by random draw.  Makes for some interesting teams.  Ten teams in all.

Some heavy rains delayed the shoot a bit but sun shining by the end of the shoot.

Did the best I could with the videos but if nothing else you can see everyone is having fun.....

The wife and I shot both sporting clays courses.  Only had issues with a rabbit machine.  Targets not thrown from this machine deducted from the target counter when we checked out.

Front course is overall a skeet/IC choke.  Features the tower (four machines).  A number of stations have four machines. Tower choke may vary depending on the height of the tower. We shot the front course using LM. 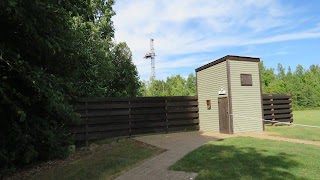 The back course is LM.  The second station and the last station have seven machines each.  Station #1 is the hardest.  Your not doing anyone a favor if you take a new shooter to the back course.

Not a club you can just drop in and start shooting.  Private club. A fee is imposed for guest and visitors (limits on number of visits).   Best to go with a member for the best rate if not interested in joining or wait until the club is hosting a shoot.

The club had an open house this past Sunday.  First ten minutes of video, remarks in French.

My stamina has not been what it should be this past summer.  Thankfully benches at every shooting station and I can take a break when needed.

Club chasse, pêche et tir de Farnham inc. (Farnham, Québec) is having a trap/skeet fun shoot this Sunday and I'm going to shoot my first trap targets since opening day at Club Huntingdon at the beginning of summer.  We'll see how it goes....

Host of NRA TV's "Relentless," Dana Loesch went after the classic children's character Thomas The Tank Engine after its maker, Mattel, joined forces with the United Nations in efforts to increase gender diversity and representation on the program and include new characters from around the globe.

Loesch, a conservative spokeswomen for the gun rights group, specifically called out one new character – Nia, a steam engine from Kenya.

Why the hell is the NRA getting involved in diversity issues?

NRA needs to get back to addressing firearm issues and not race or other social issues.


Posted by Lost Target at Thursday, September 13, 2018 No comments: