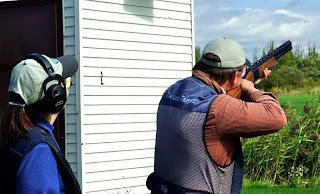 We attended NSSA shoots in the last two weeks and had a good time at both.

My wife Heide was the better shot at both shoots. We tied in the 20 gauge event at the Underhill shoot, but she left me in the dust in the shoot off. 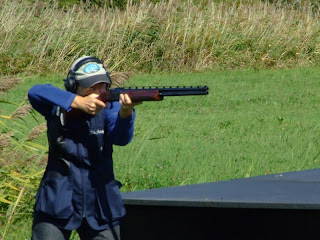 This weekend two skeet shoots on the schedule, one a benefit shoot on Saturday, and on Sunday, a club championship. Heide is not traveling on Saturday, but is shooting on Sunday.

Hopefully, I can break her winning streak : )

All the shoots on the schedule this year have only been one or two guns. We have shot at 4-gun shoots, but only attending one day.

It took a few years, but I tired of attending 4-gun shoots. I can only take so much downtime at shoots and frankly I was not enjoying myself. The second day was more like work and something you were expected to do. It's suppose to be fun, Yes? I now schedule for skeet shoots where we can attend for only the one day.

In any case, just dropping in and spending a day at a club, shooting skeet, is once again a fun thing to do.

Posted by Lost Target at Wednesday, September 29, 2010 No comments:

I'm at a loss for words on this one, as many clubs, even private clubs have volunteers lending a hand from time to time (I presume a volunteer).

I don't know what if any impact it will have on clubs but it sure makes you think...

A Hilton man who lost his leg after slipping and falling on snow at a Hilton gun club has settled a lawsuit against the club for $581,000 after a Monroe County Supreme Court jury returned a verdict in his favor.

The man, Michael Tuttle, 70, had his left leg amputated above the knee in April 2007 after tearing a major artery when he slipped on a mound of icy snow at the North Star Sportsman's Club on Walker Lake Ontario Road that February and dislocated his knee.

The mound was partially blocking a doorway into the club's barn, where Tuttle was headed to fetch a tractor to aid a fellow club member in plowing snow, according to the complaint and Tuttle and his attorney.

Sporting Clays allows for non-registered shooters to particapate in NSCA events, why not the NSSA?

At various shooting venues over this past season I've asked the question and didn't find anyone against.

Small club would most likely be the ones who would benefit the most from this rule change and the NSSA would see more casual shooters exposed to NSSA shooting. A win win for both...


Non-members may participate, but in a separate category. Any non-member participating in a registered event in a separate category (Hunter Class) shall not be eligible for any NSCA awards or monies. If offered by shoot management, the separate category (Hunter Class) may have its own separate awards and/or monies. Hunter class shooters at events run concurrently with registered NSCA events will be charged the same entry fees as those paid by NSCA members including all target fees.Examples: If the total entry fee for an event is $65, including NSCA and state fees, then anyone shooting Hunter Class would also pay $65 to participate in the event. As the portion of the entry fee that would be fees to the NSCA and/or state would not be paid to the organizations, it would be retained by the club. The NSCA recommends that the target fees collected from non-NSCA members be used to promote those shooters to join the NSCA. For example, the Hunter Class winner receives a paid one year membership to the NSCA.

A first time visit to attend a 5-Stand fun shoot at the Club de tir Sandhill in Cookshire-Eaton, Québec. Located near the city of Sherbrooke.

From what I saw the club is primarily a rifle/pistol club. No clubhouse that I'm aware. The club does have an older 16-yard trap field. No handicap positions.

The 5-Stand and the Trap field look well maintained.

The 5-Stand is a recent addition to the club. I think no more then three or four years old.

The 5-stand was well thought out... 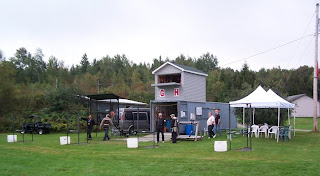 The clay target shooters took a 40 foot cargo shipping container (heavy duty) and converted it into an office and clay target storage area. I saw a number of electrical outlets. They attached a small building to the top of the container and placed two Winchester machines in it. 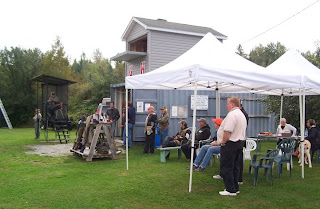 The scorer sits in an elevated position behind the shooters.

The shoot stands are well built. Covered with foam to protect your firearm.

A huge gun rack is centrally placed for use by all. A nice touch...

Add two pop up tents and you have a great venue for holding shoots.

Something a little different in target presentations was that on the shoot menu, letters enclosed in parentheses (B E) were doubles (true pair). You might get doubles on your second turn and at the next station on your third. Some stations did not throw doubles. I liked it...

Cards were changed for the second half of the shoot and one station was added.

All in all a good experience.

I included a link to an updated Google map on the photo page and also added a GPS address, as the clubs location was hard to pin down doing a normal google map search.

The club has one Porta Potty. I saw no bathrooms. If you travelled a distance a stop at one of the local fast food establishments to use their facilities is recommended prior to arrival.