The club is 15 minutes southwest of the Daytona Beach Raceway. I recommend a stop at McDonald's or one of the fast food chains located near the I-95 exit to use the restroom factities unless you don't mind using a porta potty.

The number of volunteers working the club today was impressive. Not many clubs are that blessed...

Today saw the clubs new 5-Stand go operational, with the official opening scheduled for the 29th. Ten machines and loads of fun...

In the last year, pads and walkways were poured on both the trap and skeet fields and a target storage building was constructed.

Before you ask, No, the club does not have loaner guns or rentals.

If your going to visit the club more than one time, you should consider purchasing a club membership and shoot at the member rate. You can't go wrong...
Posted by Lost Target at Wednesday, January 26, 2011 No comments:

A cool start to the day at the WW Sporting Clays 100 target NSCA shoot.

We did not want to wear shooting coats so dressed in layers. We felt the chill from time to time. When waiting are turn to shoot we found ourselves standing in the sun when possible.

A noisy day as the US Navy Blue Angles were training at the nearby naval air station practicing their airshow maneuvers. The noise was so bad at times that shooters stopped shooting, waiting on aircraft to move out of earshot.

Lunch was included in shoot fees. Hamburgers and hot dogs were served.

An afternoon of sporting clays at Amelia Shotgun Sports. 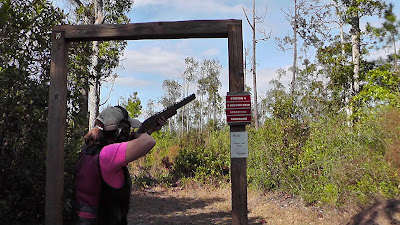 Heide at the stand!

The first thing we noticed when we drove into the parking lot was the clubhouse addition. Matter of fact, carpenters were on the job doing interior work. 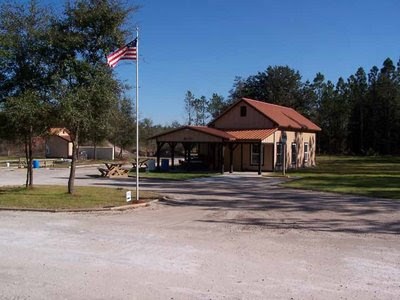 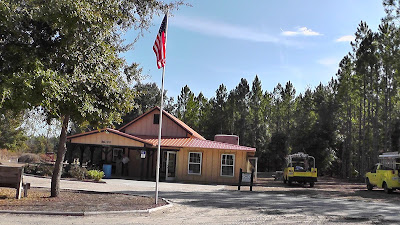 The clubhouse with the new addition. At some point a pole barn that will include a kitchen area will be built to the right of the building. The addition has a fireplace at the rear.

The club has a 12 station course. They have additional stations that can be utilized when they change up the course. Also, a number of stations have two stands. You don't know what your going to see when attending a shoot. We had problems with one machine on station #2. It was repaired prior to us leaving the course.

Not an easy course. You have to hit the ones your suppose to hit or your not going to be a happy camper when you add up your scores. The club has plans to put in a course for less accomplished shooters (beginners or for the occasional shooter).

The club is now offering FITASC with one parcour. I suggest you call prior to arrival if your main purpose is to shoot FITASC to insure its up and running. Today, it was not in operation.
Posted by Lost Target at Thursday, January 20, 2011 No comments:

We spent the afternoon shooting skeet at the Palatka Skeet Club. 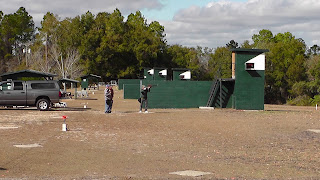 We had not shot a round of skeet since early November, but the transition from our recent trap outings was uneventful and we both had decent rounds.

I shot four rounds using two different Remington 1100's. I normally use an O/U for skeet but was testing various shells, both factory and reloads. No failures to feed or eject...

I'd be surprised if the club was not making some type of improvement, as it's a club that is always moving forward. I was thinking that when I arrived and as always a couple of improvements were ongoing. 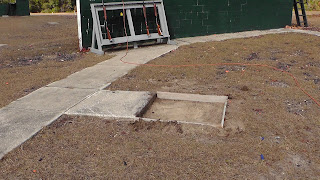 Pads being replaced. 12 pads on various fields to be poured on Thursday. 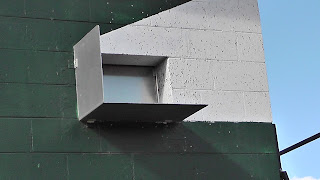 New windows and deflectors being installed.

I mentioned it in the past but an unique club in that members are required to open and close the fields they shoot on. The only way to not be responsible for closing the field is if someone else wants to use it when you depart. Then they are responsible. Closing the field includes policing the field, filling machines and removing empty boxes. Seems to work well as except for a few empty shells left behind from time to time, or having to top off a machine, never a problem.

A reasonable membership fee. Members shoot for $4 per round, non-members $5.

Posted by Lost Target at Wednesday, January 19, 2011 No comments:

A cool start to the day but by noon the temperature had reached 60.

As in the previous year the shoot started at 10am versus the advertised start time of 9am. If you have a distance to travel you may want to call the day prior and see if the desk has an estimate on start times.

The shoot ran smoothly and scores were posted in a timely manner. As the norm the club was aggressive in the use of the radar gun.

Birds flew steady and I don't think the squad as a whole had one no bird call.

Between 100's and cleaning the 1100's I found that my wife's stock had come loose. Carrying spares and all the tools for repairing 1100s it was a quick fix.

The club is located next to an airport and shooters need to pause during aircraft approaches and takeoffs. Not a problem on Saturday. I've had to stop shooting a few times in past years, but I spent more time waiting on someone to clear a wad from a barrel. Not something that should bother most.

The chain has broken links...

I'm sure a reason for the change to this years Florida Trap Chain Shoot schedule, but it caused me to drop one shoot from my schedule and most likely won't be attending a second due to the schedule change.

I talked to two people involved in the trap program at there clubs and I still don't know why the changes were made.

Two date changes that have me scratching my head...

In previous years it was in late January. We attended the shoot in 2010 and it was 90 degrees plus on Friday. Are they hoping for cooler weather in March?

Jacksonville moved from a February date to: Jan 7 - 9. A huge gamble.

Of course, the clubs agreed to those dates, but...

Jacksonville would be best served with the Mar 8-13 date.

UPDATE: The Chain Shoot scheduled for the 8th thru 13th of March at Miami has been cancelled.

Warm coats a must...

Targets hopping a bit but I never saw a target coming off the arm broken.

Except for an occasional hiccup, the voice release worked flawlessly. You never know if its the shooter or the system, but usually a quick adjustment of the mike solves most problems experienced by shooters. 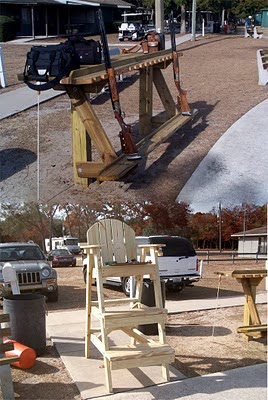 I was told this was to be the last chain shoot hosted by the Jacksonville club. Hopefully, the decision will be rethought and once again Jacksonville will be part of the chain in 2012.

70 degrees and no wind to speak of.

I think an increase in participation from previous Tuesday visits, as a second field had to be opened. May have happened once or twice in the past during a visit, but not that I can recollect. Nice to see a crowd! The skeet side of the house also had a nice group in attendance.

We have not shoot trap since early November, so we spent the day getting use to swinging the gun. It can get heavy after a few rounds...

We shot on the one open field when we arrived but ended up shooting on the second field for the remaining rounds. I thought the second field targets were a bit flat, but that was OK as it made for good practice.

We'd like to attend a shoot in the near future, but it will take a few more days of practice before we spend money to shoot registered.

As for whats new?

The sporting clays course is being moved to the east side of the trap and skeet ranges (Like the setup at Rochester Brooks in New York). I'm not aware of how the stations will be laid out).

A clubhouse is in the advanced planning stages, with a drawing available for viewing. Looks impressive!

Talk of the trap side of the house going from five fields to seven at some point. May not happen for a few years, but I like that someone is thinking along those lines. What I would like to see is shade areas for sitting/waiting built behind each trap field.

I heard talk on several things that may be in the pipeline but not sure if I'm at liberty to say, so will take a pass. In any case the club is marching forward and not living in the past...
Posted by Lost Target at Tuesday, January 04, 2011 No comments: