I installed Windows 8 on a laptop.

An easy install, but it did take sometime.  I defragged the hard drive before I started and also made the necessary backup of data.  Installed right over the previous version.

During the install it asked for Microsoft passwords and passwords to access the internet, but I ignored.  Had internet access when the install was completed without having to punch in the password!  I don't use the Microsoft email program and ditched it.

As  part of the prelim install procedure the program checks your computer to see if its suitable for an upgrade and also tells you what programs are not compatible.

Two programs that were identified that I was worried about, as they would have cost me big bucks to upgrade, worked fine after installation completed.

I ended up unpinning many of the icons on the new start page.  On the left side I kept Desk Top and Weather.  The page was too busy with news, stocks and so on.

I even unpinned Internet Explorer.  I access it from the Desk Top.

I kept programs listed that I use weekly, if not monthly, and unpinned the rest.

Internet Explorer needed some work, as my toolbar was messed up.  I have it back where I want it.

My password program was not to be found.  I gather not yet 100% compatible with Windows 8.  I having it working, but a few extra steps now needed to retrieve passwords.  Will be testing programs in the next few weeks!

A few password protected websites asked me ID type questions (What is your pets name, what color is your house) as they did not recognize my computer.

Had to go looking for new card games, as the ones I had were no longer working or no longer available.  The Store had free replacements.  Just hit the search button to find useful apps.

Oh! Where is the search button?

Bottom or top right corner of your screen is where you want to place the pointer to bring up what I would call the heart of Windows 8, to include the search button. In that area of the screen you will also find the power button needed to turn off your computer.  I had to Google to find out how to turn off the computer.  Its under Settings!  Hit the power button.

One last thing.  The bottom left corner will bring up the start page and the top left corner will show you what you have open.  I think!   Still trying to figure it all out without reading the directions.

I attended the National Trapshooting Day shoot at Club L'Acadie and after the handicap event I ran into my friend Reza who makes the Montreal Skeet Club his home club.

Reza was paying a visit and at the club to shoot skeet. I joined him for a round as I had not seen him since last spring.

The first time I shot skeet at L'Acadie in five years, if not more. 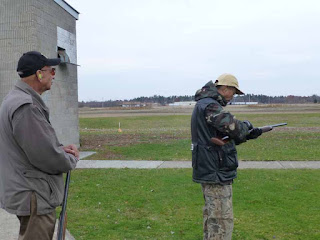 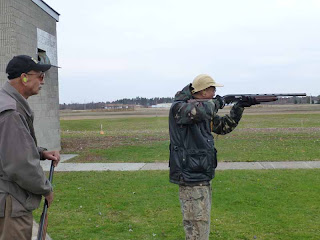 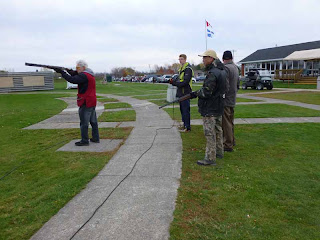 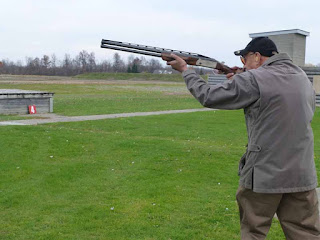 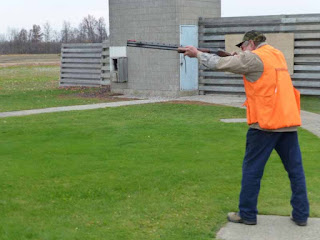 A good time and a few laughs.  Don't know how we got threw the round as a lot of leg pulling!

Targets were up to speed and the trapper was right on the money.

I was thinking of a second round but had already shot 200 targets in trap and it was starting to be a long day.

No problems or delays at the border, coming or going.

A shooter will be handicapped between 18 and 27 yards and at the
highest yardage punched on his/her Average Card, unless he/she is
required to shoot penalty yardage.

Ages before the event of changeable chokes, adjustable combs, adjustable length of pull, recoil reduction systems and even adjustable or replacement ribs, and modern shotgun shells; short handicap shooting made sense.  Only top shooters scored in the 90's at any distance! Now if you don't shoot in the 90's your just shooting for fun. Yes, even at the 18 yard line!

Also, and this must be part of the discussion, the angle of targets thrown left/right, is not as wide as it was at shoots held in the "old" days.  Less angle, easier targets...

In the past two years the ATA has been given yardage reductions to shooters who are no longer competitive (maintaining minimum averages) at the yardage they earned.  Some have ended on the 18 yard line!

Why in this modern era are we still shooting from the 18 and 19 yard line?

The only difference I see is an increase of moving voice release speakers after each shot because of an increasing mix of 18, 19, and 20 yard shooters.

Lets move the game into the modern era and at least element 18 yard shooting, if  not 19 yard shooting as well!

The club advertises a 9:30 start time and at 9:30 if not sooner the first squad was on the field.

A cool start to the day, but by the time my squad (squad 5) took the field it warmed up enough so that a few layers of clothing could be removed.

No problems with the voice release and machines threw targets without any issues.

I usually have problems with field #2 targets.  My score drops off, but not this time.  Had four good rounds!

A two hour drive to get home and passed on handicap.  Doubles was also offered. A long weekend as we shot NSSA skeet on Saturday in Quebec. It was time to head home.

On the way home I almost took out two turkeys on I-87.  Saw one crossing the road and slowed down.  From 70 to 50 in a blink of an eye.  Sure enough two more popped out and if I had not slowed to 50 I would have hit them both. As it was, a close call.  Nice size birds!

When we departed the house it was pouring rain.  Weather radar showed it should be clearing just about the time we were scheduled to shoot (11:30am.), so we headed out.  On and off rain when we arrived.  Sure enough it stopped raining just as we were taking the field and saw sun and blue skies at the end of round #4.

2nd skeet shoot in a row that I couldn't get off station #1. Other then that happy with my shooting, as not missing on the other stations.  I'm sure next year it will be some other station.

By tradition the Le Bonhomme Pumpkin is a skeet shoot where attendees bring inexpensive gifts that are randomly exchanged with the other shooters, with a few other gifts provided by shoot management.  I once (by random draw) won a weekend in Quebec City at one of it's finest hotels!

We didn't stay for the second event as we had a long drive the next day.  When we did depart the sun was shinning brightly!

No traffic at the small bording crossings we used, coming or going!

I use Gamaliel Shooting Supply to track the price of lead shot used by clay target shooters.

Not necessarily the best price.

Guns in the News, visit the Lost Target website

I shot the Brian E. Soper Memorial Shoot hosted by the Beaver River Fish & Game Club in Croghan, New York this past Sunday. 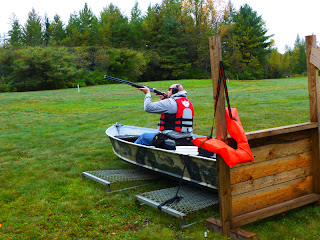 A fun shoot! Trophies and a Lewis Class option. A BBQ chicken dinner was available for $5.

Drizzled for most of the day, but never a hard rain. In the low 50's, but not cold.  Rain pants and jacket made for comfortable shooting!

18 Stations in all. Each squad was assigned a trap boy. Squads did the scoring.

A variety of target presentations.  We had fun at the rabbit stations and of course shooting while sitting in the boat!

The shoot was well run.  The BBQ dinner was excellent!

I hit a Lewis!