I crossed into Ontario early Sunday morning.  Crossed at Cornwall.  No traffic to speak of and no issues with my shotguns.

Arrived at the Golden Triangle Trap and Skeet Club before the shoot started, so made good time.

The club broke down it's 5-stand and sets up it's three fields into three parcours.  25 sporting clays type targets on each field.

A two-partner fun shoot.  Steve Roland from Ontario was nice enough to be my partner.  We had a good time (I know I did) and more then a few laughs. 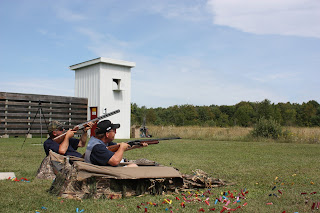 Steve and the Lost Target 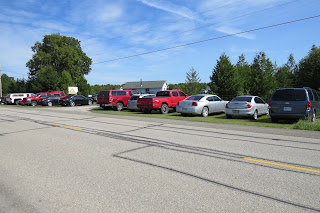 Parking along the road....

A number of first time visitors to the club.  Talked to a number of hunters who said the first time they shot clay targets off machines that weren't hand traps.  A few could of fooled me, as excellent shots!

A long day and a long drive and had to leave before the last shots were fired!

No traffic problems crossing back into the states, but did have the serial numbers on my shotguns checked by US Customs.  Just a few minutes delay....

If thinking of attending a shoot in Canada, you must have either a Passport or an Enhanced Drivers License to return to the USA.

Many border states issue Enhanced Drivers Licenses.  Cheaper then a Passport, but can only be used when driving across the border, not when flying.

I shot singles on both Friday (Prelim) and Saturday at the 59th Quebec Provincial Trap Championship held at Club de tire L'Acaide.

An incoming wind.  Ended up holding my barrel about a foot higher then I normally do.  Only a few times did the target not fly above my barrel.  A tough go of it, but shot an 88, a 25 straight on the first field, but targets were just to tough for me to keep it up!

Several weeks back I shortened the stock on my 1100 and played around with the comb, as my gun fit was terrible (lost a few pounds) and my shooting has been steadily been improving (at least holding steady).

The club did a nice job on Saturday.  Registration went smoothly and the shoot started earlier then as seen in the past.  The down time between the first 100 and the second 100 was minimal.

Nice job by the trappers.  Kids were in the houses loading while we were shooting. No down time waiting on machines to be filled.

If your in the USA and thinking of attending a shoot in Canada you will need either a Passport or an Enhanced Drivers License to return to the USA.

An Enhanced Drivers License is issued by many of the border states and is cheaper then a passport.  The license can only be used for driving across the border, cannot be used for flying.

Hats off to the Galt Sportsmens Club!

Fours parcours (Super Sporting), four 5-stands (100 target event), two main courses, Make-A-Break, and 5-stand practice field. The second main course (White) was brand new, built for the shoot.  From the looks of it they used the land the clubs archery range is located on.  Expanding land usage and the road system.  I really liked the White course, visually pleasing.

Motels were 10 - 15 minutes from the club.  My drive every day (Comfort Inn) averaged out to 12 minutes.

Registration was as expected and throughout the shoot, scores posted rapidly. Winscore  had the scores posted each night I checked from the motel.

Rained hard Friday night after dinner. Early rotations on Saturday saw a number of broken targets.  It seemed to work itself out and when running around with my camera when not shooting and didn't see any unusual breakage.

For main event targets I found the Red course to be more conducive to more open chokes and the White course requiring a tighter choke.  I thought a lot of target speed on the Red course. Shooting an 1100, I went with LM on the white course and at least once used modified. I saw a lot of curling targets on both courses. 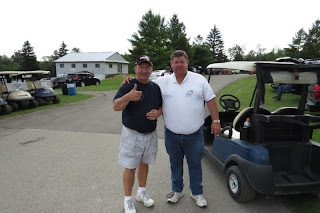 Me (Joe Potosky) with George Digweed!

George Digweed won the shoot after a shoot-off.  Top scorers in ICTSF shoot off, no matter if ahead by one target or ten.  Such as they do in Olympic shooting sports. George was first after 200 targets and also first after the shoot-off! 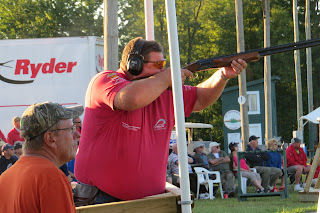 The Make-A-Break shoot-off video has some good shoots of breaking targets.  I pointed my video camera into the sky and hoped for the best.  I got lucky, as does not always work out!

If your interested in seeing George Digweed in action at the shoot:

Halfway through the video an interview that George gave to the press that I recorded.  I setup my camera next to the reporter and just let it run.  I saw the published interview and they cut the heck out of it.

Ammunition was plentifully. Not a problem if you needed to purchase a case or two.

Those working the kitchen and those moving machines and targets, a great job!

I found the refs for the most part to be very knowledgeable.

The stands on the new course were well constructed.

As for those coming up from the states to attend the shoot.  A two hour delay experienced crossing the border by some.  A Canadian weekend and also a major weekend Italian celebration taking place at the crossing used by most, especially on Friday and Saturday.  I crossed east of Toronto (Cornwall) and didn't experience any delays, both coming or returning.  No one said they had a problem with bringing firearms and ammunition to the shoot.