Located west of the St. Augustine airport at the end of Big Oak Road. 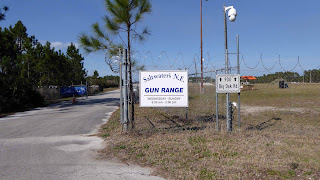 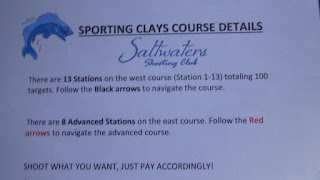 The flyer will shortly be outdated, as we saw six brand new machines waiting to be installed and was told six more were on order.  We shot both courses, but cut down the numbers on the West course so we could take some targets on the advanced course.

Interesting targets on the advanced course.  You have to pay attention!

I was told then end game is two 14 station courses, maybe 15.

The piston seal broke on my wife's Remington 1100. 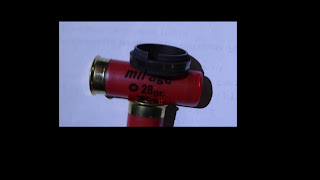 I carry enough parts in my shoot bag to rebuild an 1100 and she was up in running in minutes.  I was just thinking the other day when cleaning the gun that it's been three months and no broken parts.

Ilya Sheyman, a failed Illinois contender for Congress and the executive director of MoveOn.org Political Action, has taken credit for the violence at a cancelled Trump event last night in Chicago. He promised similar violence and disruption will occur at future Trump political events leading up to the election.

“Mr. Trump and the Republican leaders who support him and his hate-filled rhetoric should be on notice after tonight’s events,” on the George Soros funded MoveOn web page. “To all of those who took to the streets of Chicago, we say thank you for standing up and saying enough is enough. To Donald Trump, and the GOP, we say, welcome to the general election.”


http://www.infowars.com/soros-funded-moveon-org-takes-credit-for-violence-in-chicago/
Posted by Lost Target at Saturday, March 12, 2016 No comments:

We had flames exiting the chamber of a Remington 1100 and a Beretta A400 on are last outing.  Three times in all.  Shells came from the same box of Nobel Sport shells.  I assume unburnt powder.

Knock on wood.  Heide's Remington 1100 has been working flawlessly.  Religiously upon returning home I remove the bolt and give the firearm a cleaning with Breakfree.  Letting it sit overnight and wiping down the next day. Something I started doing a few years back is using two (2) O-Rings.  If either one starts to look beat up I replace it.  Haven't dropped the trigger for cleaning for a couple of months and overdo.

We shot sporting clays practice the other day.  Not a good idea as I'm nursing a bad back, but the weather is too nice to not shoot.   Didn't shoot a full 100.  On some stations just took a couple of shots.  Definitely no registered shooting for the time being.  And, add a bad left knee that needed to be injected with cortisone back in early February.  I can shoot all day and the left knee doesn't bother me, but if I go shooting the next day without taking a day or two off I can feel it when I lean forward on the leg.

Not going to name the club, but I suspect a long time club in Northeastern Florida will be closing.  Was disappointed in its condition when we visited.  Doesn't look like a dime has spent in the last few years.  Machines throwing good targets, but the overall impression was rundown.  It use to be on my recommend list when asked.

I was told the Saltwater's gun range in St. Augustine (west of the airport) purchased six additional sporting clays machines.  When we last shot at the club we shot a 19 station sporting clays course.  I left with the impression once all machine buys had taken place, at some point the club would have two separate 12-14 station courses

If your local member run club isn't hosting charity/fund raising type shoots it's missing out on a sure money maker.  Can't get over the number of such functions held at various clubs.  Not uncommon for a local business to hold a shoot midweek for it's workers or association.  Sporting clays shoots first caught my eye, but when I started paying attention, skeet and or trap fun shoot fund raisers not uncommon.

After seeing it in action we purchased a MOJO Magnetic Shotgun Hull Retriever.  Shooting semi-autos we leave a number of shells on the ground, especially when shooting skeet.  Seems to pick up more shells at one time then other products out there.

The sole came off my hiking boot in the middle of a hike.  Ten years they lasted and beyond repair.  I purchased a pair of Moab Mid GORE-TEX boots, as the brand that failed is no longer available. We did an eight mile hike a few days ago and used the new boots without break in.  Comfortable and no blisters.

Was having issues with the backpack I use for hiking.  Looked locally but didn't see anything that fit my needs.  Ordered a  L.L.Bean Continental Rucksack.  Fits like a glove and very comfortable.  I wanted a bag where you could pack two (2) one quart bottles in side compartments (one on each side) of the pack.  No longer common on many brands of packs.

We hiked a trail we hadn't done before. The second time I was a little confused along a trail this year.  Had to use the map constantly.  Some trails should be adopted by a local hiking club.  Do you really need to come to an intersection and don't know if you need to take a right or a left?  As always I set a turn-around time incase we have to back track and still have time to return to the vehicle in day light hours.  I guess the smart thing to do, especially on the out of the way trails that your not familiar with is to use a GPS designed for hiking.  Garmin has a nice one $$$$.  Download the map you need, mark your vehicle location, and no worries.

A few photos and several short videos from the last hike. 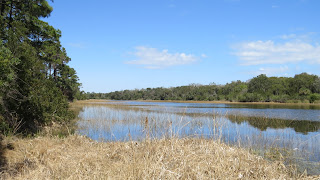 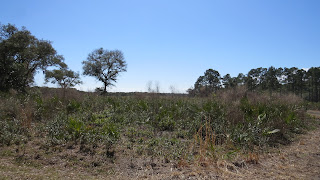 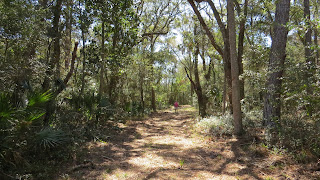 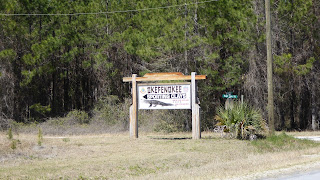 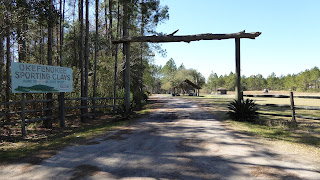 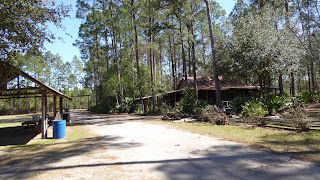 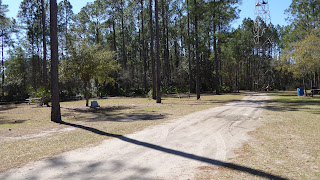 Saturday afternoon (1pm) and no one at the club.

I checked the clubs web site just this AM to verify hours and to see if anything was scheduled.

Posted on the site; Saturdays and Sundays from noon to dark.

I looked around but no closure notice, nor explanation.  I was hoping to see a note, "back in 15 minutes", but nothing.

In the old days this would be the point where I go off, but what's the point.

I had two clubs in the GPS that were an hour away and along the route home.  We choose one and were able to get in some shooting.  If I known we would be driving for a little over three hours to shoot clays we would have driven to Tampa Bay Sporting Clays and made a day of it.

I wore a warm shirt the first few days, but Saturday afternoon and Sunday saw warm temperatures, with Sunday temps in the 70's.  Halfway through the course on Saturday I removed the warm shirt and just wore a T shirt.  A number of shooters wearing jackets.  Sunny and very little wind on the three days I attended.  My friend shot FITASC on Thursday and said they had wind.  Not effecting the birds unless they went above the tree line.  I think he ended up with a 78.

The weather can be tricky this time of the year and if thinking of attending a future shoot, warm jacket and shooting gloves, even throwing an extra sweater into the bag is recommended.  In past years I wore rain paints to keep cold winds off the legs.  Just because it's Florida, it can get cold! 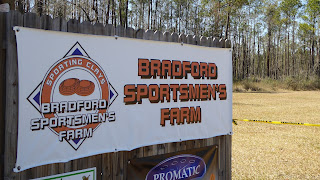 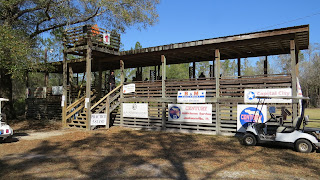 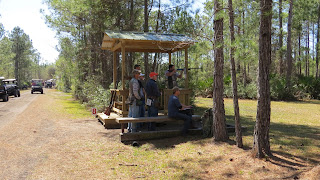 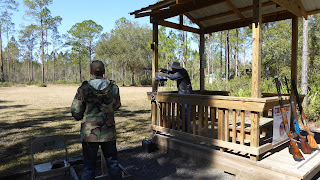 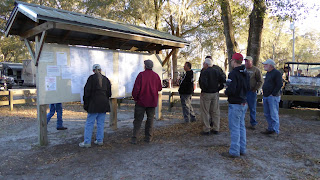 Well run shoot as the norm.  We didn't experience any issues when on the course and I don't remember any backups.  Refs were up on the rules and didn't allow themselves to be bullied into given someone a target (you see a lot when running around with a camera).

Targets weren't over the top.  I saw Bill McGuire miss the "easy" target and break the most difficult.  I didn't shoot the FITASC (4 parcours) but what I saw, fair targets.  Never did get over to the small gauge course.  5 Stand targets looked fair.

The club was running two (2) practice 5-stands.  A nice variety of practice targets.

I stayed for Saturdays dinner and needed a jacket once the sun went down.

As usually at shoots, had very friendly and supportive squad mates for both the preliminary and main event.

I had a bad time on Sunday.  Bent down to tie my sneaker when getting dressed and couldn't stand up, the back went out.  I should have withdrawn, but thought I could work through it (must be a guy thing).  First station went well, 6x6, but down hill fast after that.  It's now Tuesday and still walking hunched over and pain pills making it bearable. The way it usually works is I'll try to stand up at some point in the day and no pain and walking like nothing ever happened.

Very happy with the A400 Beretta I started shooting mid 2016.  Three hundred and fifty shells shot over the weekend without issue.  Shot RIO shells.  The only thing I did when putting it away was wiping down the barrel.  Would never think of not cleaning the Remington 1100 I use to shoot each night.

A third video named Breakin' Targets is just that, targets being broken.  May not be for everyone.