On Sunday May 29, 2016 Vernon National Shooting Preserve, 3291 Burns Rd, Vernon Center, NY, and the Central New York Veteran’s Outreach Center (CNYVOC) partnered to hold the 8th Annual Veterans Benefit 100-bird Sporting Clays tournament. Over the past 7 years this benefit shoot has made donations to the Wounded Warrior Project, the Fort Drum therapy pool, and the Rome Veterans Center. Vernon National Shooting Preserve has made it a priority to keep the proceeds of this benefit locally and with that purpose CNYVOC will be this year’s recipient. CNYVOC (cnyvoc.org) is an outreach group that seeks to enrich the quality of veteran’s lives and services Utica and the surrounding Central New York area. CNYVOC provides charitable, educational, social service, and housing services to veterans in need.

Registrations now conducted at the main club house building instead of the event tent.  Worked well and refreshments available.

Started out on the sunny side, but not more then halfway through the shoot you could hear the rumble of thunder (you can hear the thunder in the shoot video).  We got rained on pretty good at one point, but we were able to keep shooting when the rains stopped.  Three or four stations later and the skies opened once again with numerous lighting strikes.  That was it for me and walked off the course, calling it a day.

Two candidates running for the 22nd Congressional District Republican ballot spot were on the course.

May the best man (woman) win.

The first time I seen the TrapMaster target release system. 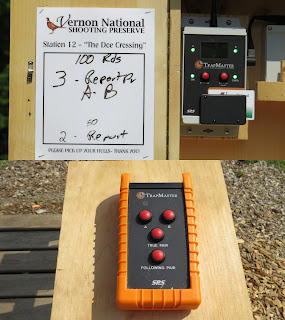 On the return home about halfway between Speculator and I-87 we ran into a fierce thunder storm.  Lighting strike and no more then one second delay to hear the thunder, that close.  Driving about 30 mph instead of 55mph.  Luckily one vehicle ahead and I just followed his tail lights.   If it wasn't for the vehicle I would have pulled over and let the storm pass.

It's suggested you visit the airlines website and read what they allow in regard to flying with firearms and ammunition, especially ammunition.

- Travelers must securely pack any ammunition in fiber (such as cardboard), wood or metal boxes or other packaging specifically designed to carry small amounts of ammunition.

- Firearm magazines and ammunition clips must be securely boxed or included within a hard-sided case containing an unloaded firearm.

- Small arms ammunition, including ammunition not exceeding .75 caliber for a rifle or pistol and shotgun shells of any gauge, may be carried in the same hard-sided case as the firearm, as long as it follows the packing guidelines described above.

In the original packaging from the manufacturer or in packaging specifically designed to carry small amounts of ammunition (made of fiber, wood or metal). Ammunition is not accepted in magazines or clips.

Ammunition not packed properly can be confiscated!

I shot the practice sporting clays course (think FITASC parcour), located between the Olympic bunker traps and the rifle/pistol range.  It has eleven (11) machines, to include two rabbit machines, set in a circle.

We moved a plastic bucket around to designate shooting station. You want to shoot a long bird, so be it.  30 yard crosser, not a problem.  We just moved the bucket.  A few directions you couldn't shoot, like towards the access road.

No set presentations.  Bring out 25 shells and shoot what you want, from any machine when it's your turn.  On your call; singles, reports, following pair, true pair.

No slow targets.  Targets flying fast.   Think the length of a sheet of plywood or more for leads on some of the presentations (depending where the bucket is set).

A good workout for the serious shooter.  The club also has a thirteen (13) machine 5-stand. 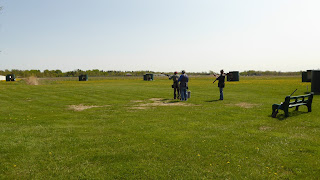 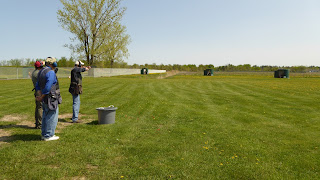 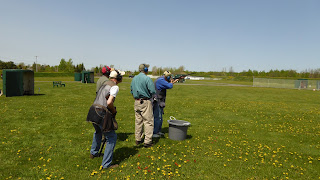 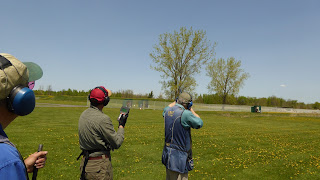 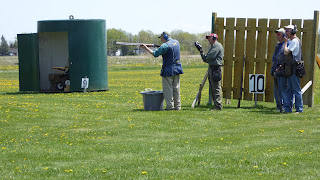 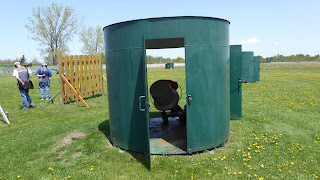 If you notice any issues drop me an email.
Posted by Lost Target at Wednesday, May 18, 2016 No comments:

May 12 @ Sportsman's Club of Franklin County

Pretty much had the place to ourselves.  Rifle and pistols shooters coming and going (they have a separate gate controlled area).

After shooting a couple of rounds of skeet a NY shooter arrived and we shot trap.

No machine or target problems.

The club throws Lawry targets and no complaints.  The grass grows green so whatever Lawry is using to make them environmental friendly is right on the money.

PAT Trap skeet machines in all three fields and a PAT Trap in the lone trap house. 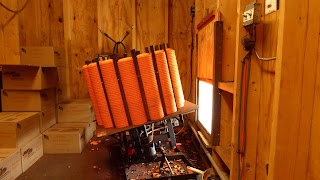 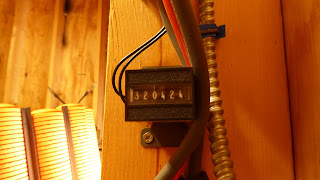 The club is open 12 months a year and winter weather doesn't seem to bother the machines. When I used to shoot in freezing weather at my old club we'd let the PAT Trap run for 10-15 minutes before use. Could be longer depending on the temperature.

It can be noisy around the skeet low house, as PAT machines are not quiet.

Looks like the fields were recently raked, as no target debris.

Last year the bathrooms were rehabilitated and this year the entrance hallway leading into the main part of the building was blown up.  Looks like a large closet is being put in.  A good use of space.

The clubs rifle/pistol range has seen big changes (for the good) the last few years.  A nice range and available seven days a week.

We usually drop in a couple of times a month, maybe will see you sometime. 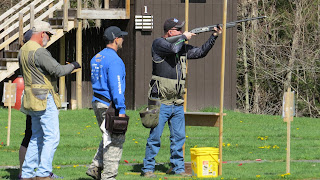 Sunny. The temp hit 72 degrees.  On and off wind, especially towards the end of the day, but didn't seem to effect the targets, except on a few stations.

Everyone seemed to be in good humor.

Not a good start.  A rather depressive experience on the first field picking up target presentations. I left the first station with two unfired shells and when I did shoot it was just poking at the target as no time to aim.  Not good and can't remember ever walking off a stand with unfired shells.  Hope the eyes aren't starting to fail.

Unfortunate, as for the most part I enjoyed the rest of the course, seeing targets clearly.

I don't know the cause, but the third rotation had a late start.  I was schedule to shoot at 1pm, but not even close.  Ended up getting off the course at 4:30pm.

A lunch was available for $7.

The ladies working the desk and kitchen did a great job.

A half dozen shooters from Quebec attended the shoot.

The club in the past has not had a permeant sporting clays course.  Only setting it up two or three times a year. This year during the warm weather months (weather permitting) sporting clays will be shot each Tuesday from noon-5pm.  Non-members more then welcomed.

I switched the photo program that I've used in the past to one that makes viewing photos on a mobile device more user friendly.
Posted by Lost Target at Sunday, May 08, 2016 No comments:

Canadians Entering the USA with a Firearm ATF Form 6NIA

What documentation does an alien need to show U.S. Customs and Border Protection (CBP) when entering the United States with a firearm?

Simple enough.  If you don’t require a VISA you don’t need a shoot invitation or hunting license.

Unfortunately, not always the case for Canadians that don't require a VISA to enter the United States and may be required to show a shoot invitation or hunting license.

What can you do if you wish to use the non-VISA option and not allowed at the crossing you use?

Submit a Complaint/Concern to U.S. Customs and Border Protection

* If entering via the state of Washington a shoot invitation for target shooters required.

If submitting a complaint I  suggest you copy and paste the Q&A to your writings.