We were at the range shooting trap today and my wife's 1100 didn't close properly.  When she pulled back on the handle a metal piece fell to the pad.

Part of the Forend Support.

Only a $9 part, but after all these years you'd think the metal would have been beefed up to prevent breakage.    Lost count through the years on how many we replaced.

You can keep shooting the gun with a broken Forend Support.  I recommend snapping off the other half.  Replace the part when you get home.

I keep a completely assembled Action Bar Assembly, Action Bar, and attached Forend Support in the shoot bag.    I keep an assembled piece, as I've had the rail break in the past.  No quick fix for that.

The wife's gun was up and running as fast as it took to swap out parts.

When I got home I replaced the Forend Support from a spare I have at home.  An easy fix.  The new part just slides on.

I had a major gun failure a few years back due to a broken Forend Support.  The broken piece stayed in the chamber and when the gun cycled it broke the Interceptor Latch Spring.  What a mess. I was told after the fact that I could of pulled out the Interceptor Latch and the gun would have still worked as long as I didn't load more then two shells.

I'm thinking Beretta for the wife.....

Loaning a Gun to a Fellow Shooter, Against the Law (California)

Your at a shoot and your gun breaks.  A fellow shooter offers you a backup gun to finish the shoot.

You decide to bring several friends to the club for a fun day and bring along a couple of shotguns that they can use, as they don't own any.

Your son wants to bring some of his friends to the club and let them shoot a round of trap with your shotgun (under your supervision).

In California come 2017 all will be against state law.

I can think of a number of times through the years I brought an extra gun to the club, as a neighbor or friend heard me talking about clay target shooting and wanted to give it a try.  No longer possible if they don't already own a firearm.

I can think of several states where you can expect this to be enacted at some point.

In California gun transfers require an FLL and a ten day waiting period.  You transfer a gun to someone.  Incur an FFL fee.  And, when returned, another FFL fee.  This is the only way you can loan a gun other then as listed below.

A backdoor to killing the shooting sports.

Still think the NRA is the bad guy?


AB 1511, Santiago. Firearms: lending.
Existing law generally requires the loan of a firearm to be conducted through a licensed firearms dealer. A violation of this provision is a crime. Existing law exempts from this requirement a loan of a firearm between persons who are personally known to each other, if the loan is infrequent and does not exceed 30 days in duration.
This bill would instead limit that exemption to the loan of a firearm to a spouse or registered domestic partner, or to a parent, child, sibling, grandparent, or grandchild, related as specified. The bill would require a handgun loaned pursuant to these provisions to be registered to the person loaning the handgun. By expanding the application of an existing crime, this bill would impose a state-mandated local program.
The California Constitution requires the state to reimburse local agencies and school districts for certain costs mandated by the state. Statutory provisions establish procedures for making that reimbursement.
This bill would provide that no reimbursement is required by this act for a specified reason.

The people of the State of California do enact as follows:

Section 27880 of the Penal Code is amended to read:

Section 27545 does not apply to the loan of a firearm if all of the following requirements are satisfied:
(a) The loan is to a spouse, registered domestic partner, or any of the following relations, whether by consanguinity, adoption, or steprelation:
(1) Parent.
(2) Child.
(3) Sibling.
(4) Grandparent.
(5) Grandchild.
(b) The loan is infrequent, as defined in Section 16730.
(c) The loan is for any lawful purpose.
(d) The loan does not exceed 30 days in duration.
(e) Until January 1, 2015, if the firearm is a handgun, the individual being loaned the firearm shall have a valid handgun safety certificate. Commencing January 1, 2015, for any firearm, the individual being loaned the firearm shall have a valid firearm safety certificate, except that in the case of a handgun, an unexpired handgun safety certificate may be used.
(f) If the firearm being loaned is a handgun, the handgun is registered to the person making the loan pursuant to Section 11106.

Fun Shoots and NSCA Not a Good Mix

When I was at the New York State Shoot I was in conversation with someone who was planning shoots for 2017.  Combining fun and ducks unlimited shoots with NSCA shoots came up.

A red flag went up when I heard that.

I guess no harm done if your club routinely throws "skeet in the woods" type target presentations when holding NSCA shoots, as no need to dumb down the course so hunters and first time clay target shooters have a chance of breaking more then 50% of targets.

But, if your normally throwing NSCA targets for the more accomplished shooters, who is your target audience when combining NSCA with a Ducks Unlimited, Wounded Warrior or some such shoot and you don't dumb down the course?

Are you throwing targets for everyone to have a good time, especially the hunters that only shoot clays once or twice a year and the club hopes they return for such shoots in the future and bring a few friends (and, maybe become members of the club)?  Or, letting them get beat up on targets and never to return and tell all there friends about the hard targets they missed?

If you offer NSCA, then NSCA members must shoot NSCA.  No option to pass, fun shoot or not. And, a dumb down course accomplishes what for an NSCA shooter? It does put money in the pocket of the NSCA and the state association, but could kill your future attendance for such shoots.

Just something to think about and the decision the club makes will impact future attendance.
Posted by Lost Target at Wednesday, August 03, 2016 No comments: 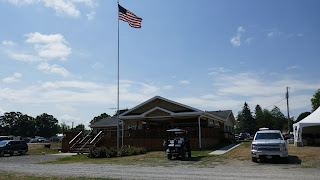 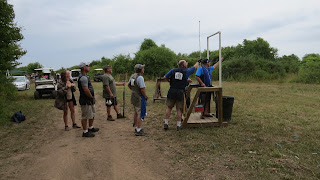 Friday, warm and humid.  A breeze kicked up in the area of the club where FITASC was being shot and made the afternoon a little more bearable.

On Saturday we had a sprinkle of rain in the AM, but other then that a dry day. Uncharacteristic for the club, but problems with several machines.  I've been attending at least one shoot a year for the last 10 years (or more) and not a common experience.  My Sunday 8:30 start saw no major issues.

One of the 5-stand's had a rabbit target thrown so close you could almost reach out and touch it.  So many shot and missed, resulting in a number of laughs.

A shotgun for Junior shooters was awarded by lucky draw, as well as one for main event shooters (lucky draw).  Cases of shells (lucky draw) for New York State residents.  All those cases and never had my number called.

Three videos and a number of photos posted (along with a link to results).   FITASC, 5-Stand, and Sporting Clays are the three videos posted.  If you like to see targets break I think you'll be happy.

After the shoot I received a critique on my shooting.  Three accomplished shooters all said I need to work on my hold points.  Figure out where you want to break the target and establish a hold point no more then a third back.  Much appreciated.

Vernon National (near Rome, NY) had put in a bid for the shoot, but not well known by down state shooters.  At a disadvantage going in and new to NSCA shooting.   I've been attending an annual Veterans Benefit shoot at the club for a number of years.  A beautiful and spacious piece of property.  They will have a NSCA shoot on September 10th.  Two individual shoots, 100 in the AM and 100 in the PM.  Posted on WinScore.