Makes closing the bolt much simpler, especially if you have a touch of arthritis.

Tools needed:  1/16 punch and paperclip.  Watch the video on YouTube that shows the steps of changing out the A400 release.

Maybe with use it will become easier to remove the bolt handle, but for now it takes a major effort.

Ended up using pliers (using a cloth to protect the finish) to remove it. 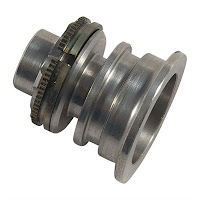 Learned the hard way on my A400.  Keep this sucker clean.  I use a wired tooth brush made for cleaning guns. Cleaning not needed after every outing, but if a clay target shooter you need to keep an eye on it, to include cleaning inside the gas cylinder of the barrel.

I thought I had purchased an IC choke for the A300, but couldn't find it and had me second guessing.
Looked and looked and no where to be found.

Five minutes after I ordered a new one I found it!  At the time of purchase I didn't have a choke case for the A300 and put it where it wouldn't get lost.