We attended the 2007 Shot Show being held in Orlando, Florida.

I hooked up with my brother and his better half. He's into handguns and for me it's shotguns, and there was plenty of both. 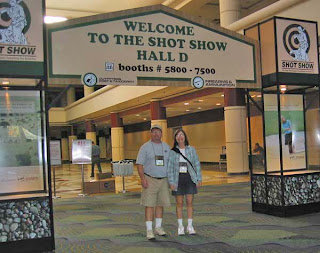 I thought we would spend part of the day browsing and then depart, as how big could it be…

We ended up staying eight hours and still did not see everything.

The show is bigger then anything I could imagine.

I had hope to see all the companies that sell target counter systems, radar guns, and the numerous trap machine companies, but if they were there I did not see them except for Promatic.

A few minor companies were selling target throwing machines, but they did not look like serious machines. They may not be minor companies, but I do not consider them major players in regard to club shooting. More like machines you may put on the farm, but what do I know.

My wife was along and we looked at the various clothing lines offered by major brands. Women shooting vest and jackets were lacking.

What we did see…

It seems Promatic has bought out the ClayMate target counter company. A good move as they can now offer a complete package too clubs. I had used the ClayMate in the past and was very impressed. I was also shown the companies 5-stand controller. Very versatile. Clubs with a home made controller may want to check it out.

The Promatic representative volunteered that in the past the companies clay target machines had problems with American targets, but a redesign had taken care of that problem. He told me European targets were harder then found in the states, thus a number of broken targets and the need for a tweak of the machines.

MEC was there and I saw a nice funnel they had developed and told them it looked pretty neat. The next thing I knew I had a free souvenir. MEC has recently bought out the company that made the electric 9000G automation add-on (Auto-Mate) that came on the market a year or so ago (you don’t use the handle). I was told it would be posted to the web site in March. They were demonstrating it at the show.

Yes, every shotgun you can think of was on display and all could be handled. The same for rifles and handguns.

All the European gun companies were in attendance.

All the wad companies were in attendance and samples could be had.

We picked up a couple of free knives and a fleece comforter. I had my pocket knife sharpened for free. Ear protection inserts were given out by the handful and various samples of cleaning fluids and brushes were given away. Hats and things of that nature were freely available.

Line after line of outdoor clothing and hunting equipment was seen.

Various celebrities were in attendance.

We saw three time Olympic Champion Kim Rhodes and we talked a bit about turkey shoots we had attended, as I understood she attended a number a few years back. She told me she went to one shoot and won thirty two (32) turkeys. She gave them all away to fellow shooters. I told her of the Turkey shoots I attend, and that I make sure to take my friend Bob Howard along, as he always gives me one of the turkey's he wins...

I asked her to do me a favor when she wins a medal at the next Olympics. It was that she give her first news interview to FOX and not NBC, ABC, CBS, or CNN the anti-gun networks. She got a kick out of the request.